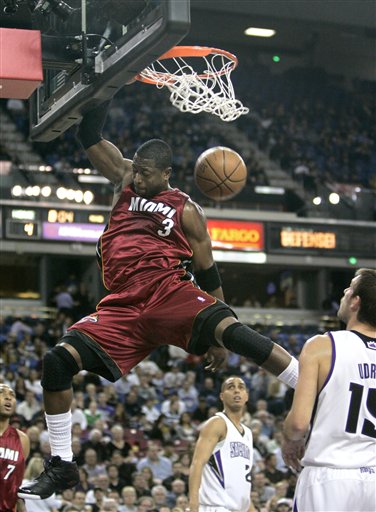 A win is a win.  And when you are looking at a situation where you could be losing a very winnable road game before playing the Lakers, you absolutely take the victory, regardless of how you get it.  Dwayne Wade would write another page in his Hall Of Fame resume’ and carry the team late in the game to a 4-point overtime win in Sacramento.

A combination of Dwayne Wade and Michael Beasley were the main reasons the Heat pulled this one out.  With Wade struggling early on in the game, Beasley took the reigns and scored 10 points in a 7-minute span in the 2nd quarter.  He would come back to life in the 4th quarter, scoring 9 points and grabbing 6 big rebounds.  He’d finish with 23 points and 10 boards, good for his 2nd double double this week.

As I noted, Wade got off to a rough start going 1-for his first 6-shots before hitting 3 straight towards the end of the 2nd quarter.  As usual, Wade came alive in the 2nd half, mostly in the 4th quarter and OT.  He drilled a huge 3-pointer right after having to peal himself off the hardwood as the result of a flagrant foul by Spencer Hawes.  He scored 10 of his 41 points in overtime, and in typical game-closing fashion, scored 5 of the final 7 points for the Heat.

Joel Anthony got involved with the offense early, scoring 6 points in the first quarter before coming out of the game with 5 minutes left after committing his 2nd foul.  This would once again open the door for Michael Beasley, and tonight the rookie was ready to roll.

It was all about Jamaal Maglore late in the game.  You could really see how hard he was trying and I loved the effort.  All 9 of his rebounds came in the 4th quarter, 5 of them off the offensive glass.  He was also setting very good screens and popped in 5 points, also all in the 4th.  Coach Spo said after the game that he was a defensive force and a presence in the paint.

Daequan Cook came back with his knee looking fine.  He drilled his first 2 three-point attempts and his defense was solid, as usual.  He faded later in the game and I wonder if that could be attributed to Cook having to sit out a couple days and losing some stamina.

The Heat missed their last 6 shots of the 1st quarter before hitting their first 5 shots of the 2nd quarter.  This is a prime example of how streaky this game was.  But when the Heat finally took their first lead with 8 minutes left, there would be four more lead changes en route to overtime.  In OT, the Heat would gain the early lead before Daequan fouled Kevin Martin while shooting a 3.  The Heat were down by 3 with under a minute left, but Wade would score the next 5 points, including that big 3-pointer I mentioned earlier, and Daequan would slam the door with 2 big free throws at the end.

I don't want to make a fuss, but Udonis needs to start hitting his jumpers again.  I can't imagine him not being started because of the defense he provides, but he has been our x-factor based on his consistent jumper.  The past few weeks his shot has been off, and he needs to fix this ASAP.

James Jones made his season debut but only played 3 minutes.  He nailed Francisco Garcia in the face while setting a screen during his first offensive possession, then was called for an offensive foul on his first shooting attempt.  It’s great to see him out there, but it may take a couple weeks before we see the James Jones we were expecting when signing him.

The OT win moved the Heat to 3-0 in extra time this year.  The loss dropped Sacramento to 0-4 in overtime games.

Missed free throws at the end of the 4th quarter almost cost the Heat. D-Wade missed one with the Heat up 4.  Then Spencer Hawes hit his big 3-pointer.  Then Daequan missed one with the heat up by 1.  Then Hawes hit the game-tying jumper.  This all happened during the last 10.4 seconds of the 4th quarter.  Hawes outscored the Heat 5-1 in that span.

This was the 32nd straight game in which the Heat held their opponent under 50% shooting from the floor, the longest current streak in the NBA.

"The Lakers moved to Los Angeles where there are no lakes..."

The Heat will take the short 45-minute flight from Sacramento to the City of Angels and get ready for a Sunday night battle against the Lakers.  Remember, these teams played a great, defensive minded game last month in Miami, a contest that was won by the Heat 89-87.  D-Wade led the way with 35 points and the 87 points scored by the Lakers is their lowest total of the season.