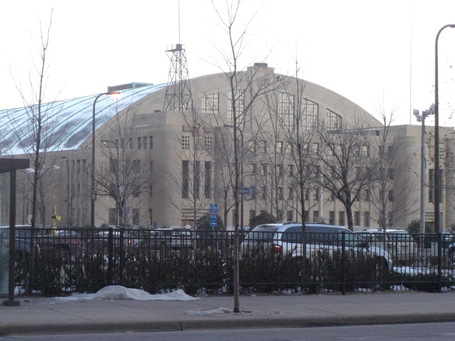 The Minneapolis Armory, former home of the Lakers

The Lakers and the Heat are ready for round two…and so am I. Miami will need to D-up in a big way just like they did on December 19th when they beat the Lakers 89-87. For those of you who stayed up late enough, we saw the Heat fighting as hard as they could to come out with a victory in Sacramento. Their defense showed up in flashes towards the end of the game, but getting contributions from all over was the key. It was a great win, but a similar effort vs. the Lakers tonight wont have us smiling when its all over.

I know the Lakers have Kobe…but Pau Gasol scares the crap out of me right now. The Heat have been very vulnerable to big guys, especially ones that can stretch the D. The way Miami has been playing, Pau should be licking his chops. He is a deadly shooter but does most of his damage in the paint. This is somebody who will always finish when given the opportunity. He is in my opinion a very underrated passer, and can play a bit of D as well.

Shawn Marion enjoyed the Heat’s thrilling OT win similar to the way we all did, by watching it. After playing the entire 3rd quarter, Marion didn’t see another minute during the 4th quarter or overtime. Meanwhile, Michael Beasley played every minute after the 3rd, with Maglore and Haslem rotating the C spot during that time. I don’t think there is any ‘hidden message’ there, as I honestly didn’t even notice while watching the game. I also wouldn’t be surprised if the same can be said of Coach Spo. He had one thing in mind, as we all did, and that was winning the game; certainly not worrying about who is on the bench. 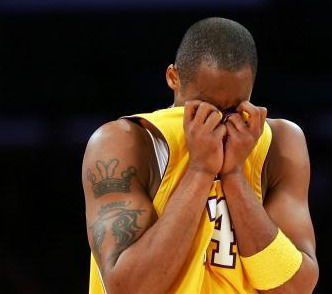 The Lakers D has been struggling of late and that is most likely due to the many injuries plaguing the team. The players are having trouble adapting to the new rotations being implemented by Phil Jackson, which have been constantly changing due to the impending injuries. First it was Jordan Farmar going down for 2 months at the end of December with a knee injury. Two weeks later it was Luke Walton needing to sit out 3-4 weeks with a bad right foot. Then last week Lamar Odom bruised his knee and hasn’t played since. He is out tonight against Miami and is listed as Questionable for Tuesday @ Houston.

Defense. The Heat were playing some amazing defense for a good part of the young season, but the past couple weeks they have looked lost. This is the game for them to snap out of it. Nobody out with an injury or playing their first game back from one. No, this team should be rested and ready to go. While I don’t think this game is going to be anything like their first meeting, Miami will still need to be at their best on D. Get back to when they were hustling their butts off, closing quickly on shooters and rotating towards the rim quickly.

Miami sits in the 6 seed in the Eastern Conference, 2 games ahead of 7th place New Jersey, and 3 games behind Detroit and Atlanta, who are tied for 4th.

Nice piece by Ira Winderman about Michael Beasley and D-Wade.

Ira also talks about James Jones’ return and how it could impact the lineup.

Chris Perkins discusses how the US Olympic Team came back to the NBA with a renewed defensive effort.