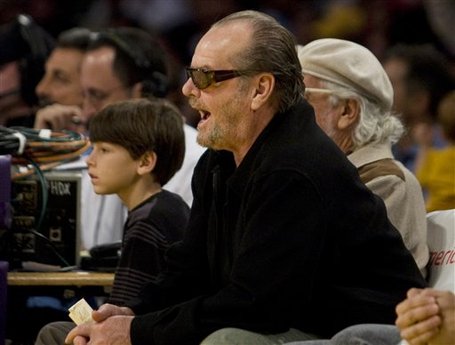 "You Want D-Wade?  YOU CAN'T HANDLE D-WADE!" (Can you see Eric Reid and Tony F. in the background?)

Considering the Heat have been playing sub-par basketball for the past week or so, this game was a spectacular effort by Miami.  They continuously shot themselves in the foot during the first half and then after halftime they didn’t show up until half way through the 3rd quarter.  They still found the game within their grasp at the end, and had the ball in their hands with a chance to tie the game at the end of regulation.  The shot wouldn’t go down, but there are a lot of positive things to be taken from this tough road loss to the best in the west.

Once again, the Heat were out shot at the free-throw line.  The Lakers had more free throws made (25) then the Heat had attempts (14).  I believe the Heat shot their 3rd foul shot sometime towards the end of the 3rd quarter.  I realize that Miami is a shoot-first team, but come on!  How about driving the paint, feeding Marion for some post-up offense, something other then jumper after jumper.

I’m also giving a K2V spot to Andrew Bynum; cause without him the Lakers may have been sunk.  He popped in a season-high 24 points, went 8-10 from the foul line and quite frankly was more then a handful in the paint, grabbing offensive boards and getting the Heat’s big guys into foul trouble.  It all came to a head when Bynum tipped in a missed Kobe shot after the Heat had just tied the game with less than 20 seconds left.

As has been the case over the past few games, Joel Anthony gets into foul trouble early and Michael Beasley comes in to pick up the slack.  He came right in and produced for us on offense, and is looking better and better driving to the hoop.  After getting off to a good start, he picked up 3 foul in 7 minutes and had to be sat down.  He came right back in the 4th quarter, where he scored 17 of his 23 points.

Maglore keeps showing progress on a gamely basis.  He had not one, but two dunks in the first half!  He is also becoming a bit of a rebound machine, grabbing 7 in his 16 minutes of action.  He is still a bit wild, which is shown in his high number of fouls despite not being in the game that much.  Showing any improvement, especially as rapid has he has been, is a great sign.  Keep it up Jamaal!

The beginning of the 3rd quarter was ugly.  It took the heat 4 minutes and 49 seconds to score their fist points, while the Lakers came out smokin’, opening the 3rd on a 12-0 run.  However, after going down by 13, the Heat would quickly counter with a 13-2 run of their own to close out the quarter.

Pau Gasol started out the game 0-for-6 but finished with 14 points and 18 boards, which ties a career high.  He is the perfect fit for the Lakers, because his game can hurt you on so many different levels.  He may not be scoring, but you better believe you still have to watch him every second.

Udonis’ jumper is still off, and you have to wonder if/when he is going to snap out of it.  He shot only 3-for-7 in the Lakers game, but did have a couple huge dunks at the end of the 4th that brought the Heat back to a tie.  However, he is shooting only 42% from the field over his last 5 games.  Not a terrible number, but for those of us who have been watching U-D of the course of his Heat career knows that 42% just wont cut it for Haslem.

D-Wade was carrying the Heat early in the game starting off 5-of-7 while scoring 7 straight points for the Heat to tie the game early.  He finished with 27 points and 9 helpers, not too bad considering he was facing double teams most of the night.

Shawn Marion was also great early on; he started 4-for-6 and looked great hitting those running one-handed jumpers.  But the more I see him chucking up 3-pointers, I want someone to tackle him and say, "Stay in the painted area!".  I guess without taking those ugly long-range jumpers he wouldn’t get the room to drive, but still….

Daequan is back!  He hit 5 more 3-pointers, including a huge 3 in the final minute that helped the Heat tie it up before falling in the end.  He finished with 17 points, and also added a couple of steals.  His defense is just an added bonus with the way he has been shooting all year. 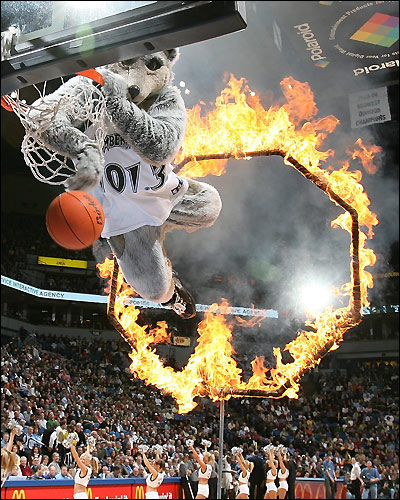 If there was ever a cure to losing, playing the Timberwolves can’t hurt.  Assuming the Heat can get from the airport to the arena and back without freezing, then it’s all good.  I was up in Minneapolis at the end of December for a ‘Wolves game, and the half-mile walk from our hotel to the Target Center was enough to make a Miami-boy never want to leave home again. 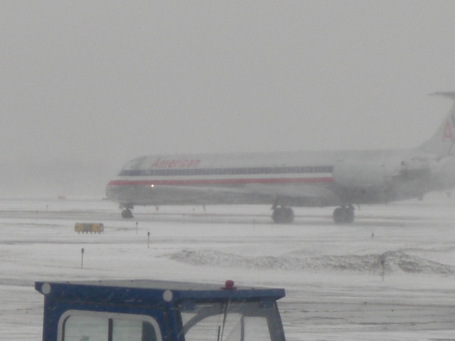 The View From My Airplane Before Taking Off From Minnesota