From cold to cold…the Heat will galosh their way from Minneapolis/St. Paul to balmy Milwaukee for a battle with the Bucks. Like the Timberwolves, the Heat can’t look past Milwaukee. There are too many weapons on that team that can hurt you, so hopefully the Heat will continue to move back towards the great defense of December.

Luke Ridnour has been playing some great ball lately. He has double-digit points in 11 of his last 14 games. He doesn’t take many three-pointers, and will be a handful for our point guards to watch. He averages 1.4 steals a game and will give our struggling point guard Mario Chalmers a very tough assignment.

I like to keep an eye on big guys, and despite the Heat’s great defensive effort on Al Jefferson, we’ll still watch Andrew Bogut. I am a fan of Bogut, and I don’t think he gets enough praise around the league. He is not 100% as he is still recovering from back spasms and a sore hip that kept him out of 4 games, but scored 14 and 18 points in his 2 games back, with 17 boards and 3 blocks.

The Bucks have had problems protecting big leads all year, but lately the issue has been guarding against the 3. In their last 5 games, opponents are shooting 52% from beyond the arc against the Bucks. Like the Heat, they will be looking for more consistent defense. We’ll see who shows up.

Richard Jefferson had a rough last game and the Milwaukee fans and press are all over him. He is having a sub-par year, but still scored 29 points 2 games ago, and 27 points 2 games before that. It’s easy to pick on the guy making $13 million, but his numbers are all pretty much what you should expect.

Another guy the Bucks faithful are getting on is Michael Redd. The knock on Redd is that all he worries about is scoring. His 3 rebounds in 44 minutes during the Bucks last game did not get overlooked, nor did the fact that he is averaging almost a full rebound less then his career average this season.

I think it would be wise to go small against Milwaukee, think about using Udonis as the 5. The bucks have several small forwards and tend to leave Bogut out there as the only big guy, so if the Heat can play their small lineup with Chalmers/Wade/Cook/Marion they will match up speed wise but have a bit more firepower on offense. This would also be a great game to get James Jones more involved. His defense would really benefit the Heat against the slashing Bucks, and this could be Jones’ ‘coming out party’.

With both Atlanta and New Jersey idle, the Heat picked up 1/2 a game on both. They are now 2.5 games behind 5th place Atlanta, and 1.5 games ahead of 7th place New Jersey. Milwaukee sits in the 8th seed, 1/2 game ahead of Philly.

Sarah Rothschild reports on Eric Spoelstra saying the Heat have to earn respect from referees.

Ira Winderman thinks Michael Beasley is beginning to play like a star.

Charles F. Garder of the Milwaukee Journal Sentinel discusses how the Bucks are handling the injured Andrew Bogut’s playing time. 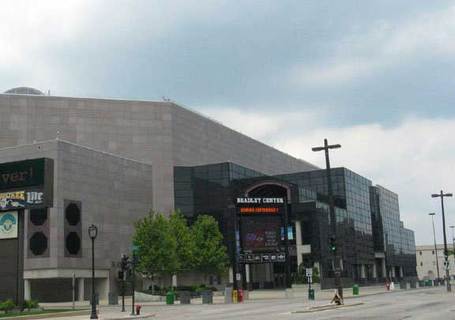 Can the Heat conquer the Bradley Center?