Sit Back, Relax, and Enjoy Your Day Off

Share All sharing options for: Sit Back, Relax, and Enjoy Your Day Off 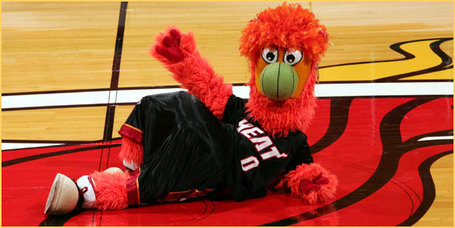 Catch your breath, Heat fans…we have more then 1 day between games for the first time this (calendar) year, and it couldn’t have come at a better time.  After winning back-to-back road games in freezing Minnesota and Milwaukee, the Heat can have a nice day of relaxation before going back to work against the Rockets on Saturday.

One thing that we have seen from the Heat in the past few games has been their improving defense.  It’s still not at the level it was at during the month of December, but they are showing that when the time calls for it, the Heat know how to clamp down.  Their 4th quarter stops have allowed them to overcome sup-par stretches during games where their D looks lost.  It’s going to be a progress throughout the year, but the main thing to look for is improvements and consistency.

One of the main components of the Heat’s defense is Shawn Marion, who has been imperative to the team’s success whether his numbers show it or not.  Marion finds himself covering different players throughout the game and provides the same shut-down defense and quick hands that have produced 9 steals in the last 5 games. What the Heat do with the impending free agent still remains a mystery.  My opinion depends on the situation.

Of course I am absolutely against letting him finish out the season with the Heat if we do not re-sign him.  Losing him for nothing is not an option, and I can only assume Pat Riley shares my opinion. (The only exception to that rule is if we win another NBA Title this year)  Should we keep him, we will need to add either a center or a play-making point guard.  I realize we could have the latter on the roster, but for now I am talking immediate production.  While Chalmers could be ‘the guy’, it will still be a couple years before we know.

If we trade Marion, I doubt we’ll do a superstar-for-superstar swap, as those just don’t tend to happen in this league.  So the combination of players coming back to the Heat will have to be specific to our needs, not just ‘trade fillers’.  I’d love to see a player like James Posey, with the great outside shooting and amazing defense, but guys like that are hard to come by.  If only we had one…

As I have previously mentioned, the Heat now appear to have two amazing ‘6th men’.  Daequan Cook has been proving his worth off the bench all season with his amazing 3-point shooting, but Michael Beasley has re-emerged as a playmaker on this team and is earning his minutes back.   Every time I see him go up for a jumper, I expect it to go in.  Not that I’m upset if it doesn’t, but the way his shot looks and as often as his jumpers go down, can you blame me?

His jump shot has been there all year, but his recent surge can be credited to playing with supreme confidence and a healthy dose of taking the ball to the hoop.  We are finally seeing some of the amazing creativity he showed during his year in Kansas.   You can see the fire he is playing with every night, especially when he starts crashing the boards.  He is going to be a rebounding beast someday…those long arms are going to be deadly when he is taught how to use them.

Unfortunately his fellow rookie Mario Chalmers is going through his toughest stretch as a professional.  He has more turnovers (5) then points (4) in his last 3 games.  He has been playing strong for about 4 months now…about the length of the college basketball season.  Perhaps ‘Super’ Mario isn’t as ready for the long NBA season as Mr. Beasley, but if that is the case then after a little rest time, Chalmers should kick it right back into gear.  I don’t expect him to be down for very long.

After the Heat finish this road trip, they will have only 1 more road game against a Western Conference opponent, and that wont be until they play at Dallas on April 1st.  While I’m already marking that date on my calendar, I’m going to be out of town this weekend but will do my best to get updates on the Rockets game up.  I’ll be home in time for the Oklahoma City game Sunday night, and the Live Threads will be running for both.