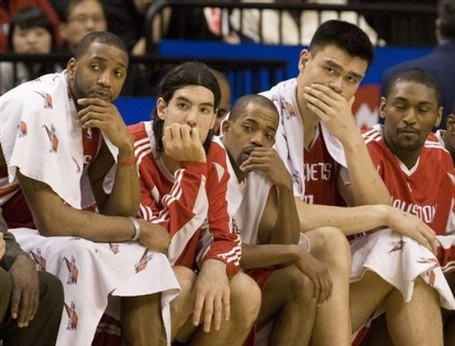 "Yo...you think I would look good in those shorts?"

It’s almost time for this long road trip to come to an end, and the Heat are entering the home stretch on a high note. The first step in repeating their back-to-back wins in as many nights will be taken tonight in Houston. The Rockets will be without a couple of their key engine components, as Tracy McGrady and Ron Artest are both out for a couple weeks. Some Houston writers are donning T-Mac as the new D-Wade, but not in a good way. The injury prone McGrady is getting under the skin of many Rockets followers, possibly because while Wade may fall 7 times, we know he’ll get up 8.

Rafer Alston…someone we are all slightly familiar with. You think we had trouble with Luke Ridnour? Rafer is quicker off the dribble and has a better shot. He will do more harm then Ridnour if the Heat cant come up with a better defensive answer then Chris Quinn. We are going to need much more then 9 minutes from Mario Chalmers, as his defense is solid, despite his recent offensive woes.

Luis Scola could be a handful for Michael Beasley, assuming our stud rookie gets his 30+ minutes, and I see no reason why that shouldn’t be the case. One positive is that the slashing Scola will give Beasley a few more opportunities to draw the first charge of his young career. Also, Scola can be a beast on the boards, but he isn’t very consistent. With the match up he is facing against the Heat, there is a big opportunity for him to have a great game.

Also keep an eye on Von Wafer. He scored a season high 23 points in the Rockets last game, shooting 10-for-14 and adding 3 three pointers. He has been a big spark for Houston, adding scoring in the absence of their injured starters.

Dikembe Mutombo played in his 1st game back in a Rockets uniform Tuesday against the Lakers. He only played 4 minutes, but went 2-for-2 from the field with 4 points and 1 rebound. Hopefully his ‘sharp’ elbows don’t cut any of our boys. Glad to see him back in red though.

There have been reports of a tiff between T-Mac and Yao Ming. Both players were angered by the story quickly squashed its implications. The quote from Yao was "The locker room is very good". I don’t know about you, but I’m convinced…

I’m sure you remember the ridiculous 1st half that Daequan Cook had in Milwaukee. The question now is can he continue that roll for the rest of the trip (and maybe the season). The 24 points he scored were a career high. Also, keep in mind this is the year he should be going through a ‘sophomore slump’, but instead has been shooting the lights out while providing great defense.

Remember November 24th? Miami losing to the Rockets 107-98 at the AAA should ring a few bells. Remember Yao Ming’s 28 points and 12 boards, or the 20 points Ron Artest dropped on us? Scola had a double double and Tracy McGrady seemed non-existent. Wade shot 30.4% from the field that night (7-for-23) while he and Chalmers shared the team-lead in points at 23. I’d love to see a repeat effort from Super Mario…and I’m not too worried about Wade having an off night. 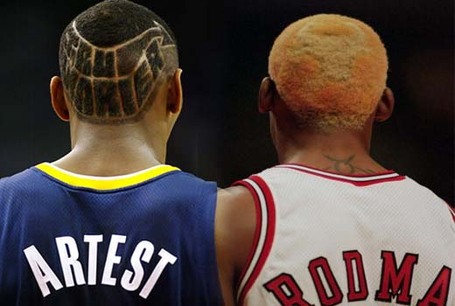 What happens if your barber is a poor speller? Or colorblind?

Get Michael Beasley involved early and get him the ball. His jumper has been sublime to watch, but nothing can match seeing his maturation before our eyes. Watching the future superstar find his legs and feel his way around the defensive end is something that should be appreciated. It isn’t often that you get to witness ‘the birth of greatness’ and Beasley has all the components to be great.

The Heat are going to need some solid minutes from whoever is playing the 1. I imagine that Joel Anthony and Jamaal Maglore will get their chances, but for the most part I wouldn’t be shocked to see Udonis playing center. As long as he gets the same back side support he got in Milwaukee, then it should be ok. Hopefully after a few hard fouls by Anthony and Maglore, Yao will stay to the outside and throw up jumpers. I can live with that.

An update on those...Orlando won in LA and the Hawks lost in Golden State. The Heat now sit 1.5 games behind Atlanta and 10 games behind the Magic.

The Heat picked up half a game on 5th place Detroit, who lost to the Oklahoma City Thunder (where the Heat are playing on Sunday). So Miami is 1 game out of 5th place and 1.5 games out of 4th. Behind the Heat, the Sixers and Bucks both won and picked up half a game on Miami, but Philly is still 2.5 games behind the Heat and the Bucks are 3 games back.

From the Miami Herald

Michael Beasley can become a threat in the post.

Protection is becoming part of the uniform in the NBA.

As we reach the halfway point of the season, Mario Chalmers has hit the rookie wall.