Back To Work On Inauguration Day

Share All sharing options for: Back To Work On Inauguration Day 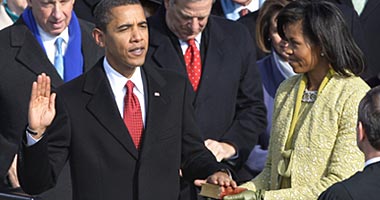 Ok my fellow Heat brethren, its time to get back to work and we’re going to hit the ground running. The ‘big’ story in Heat-land is the rumor of Shawn Marion (and Marcus Banks) going to for Jermaine O’Neal. The Raptors played last night in , but for the second straight game they sat out O’Neal. They insist that it’s because of swelling in his right knee and that he is day-to-day. I am ready for this trade to go away…I understand the Heat wanting to bring in somebody that is signed through next season, but I think they can get better compensation for Shawn Marion then Jermaine O’Neal, who has started less then 50 games in 3 of the past 4 years, and has already missed 15 games this year. I am a much bigger fan of the to for Josh Howard and Jerry Stackhouse proposal.

Shawn Marion was held out of practice again today. Coach Spoelstra doesn’t know if The Matrix will play tomorrow against , and is officially listed as day-to-day.

Udonis Haslem has been climbing out of his recent funk, putting some solid games together towards the end of their road trip. For a while there it was scary how often he was missing jumpers but that is becoming a thing of the past. During the road trip, he shot 52.9% from the field, and the last 3 games has looked much better in the 18 foot range. His shooting struggles have given us one positive, that Udonis started driving a little more and that is how he has opened himself up some space to shoot.

I don’t want to get too excited about Jamaal Magloire’s great game in . Its great to have a center who is producing, and shooting 7-for-9 in his last 2 games while going 5-of-6 from the foul line, but I’m waiting for him to put a handful of solid games together before I jump on that bandwagon. Still, it’s nice to see some kind of production coming out of the 1, and should Magloire solidify the center spot for the Heat, Joel Anthony suddenly becomes a shot-blocking bench specialist, something I think he is much more suited for.

Its time to shift gears Heat Fans. I think we can agree that the Heat are a definite playoff team this year, so looking at the bottom of the playoff standings is no longer suitable for me. I am now looking at the 4 seed as the goal for .

2 games back with half the season to go, and still 3 games remaining against and 4 against . The Heat play the Hawks next Monday, and then go to the following Wednesday. is in action tonight in .

Nice article on how Daequan deals with playing through pain.