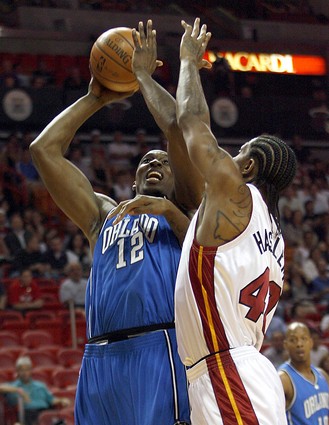 The Heat are in the midst of a tough stretch of schedule, playing three straight home games in a 5-day span against Boston, Orlando and Atlanta, all teams in the top of the Eastern Conference. We should really see what our Heat team is made of over the course of the next few weeks. They have played some good teams here and there, and for the most part have played them well, with wins over teams like the Lakers, the Spurs, Utah and Cleveland. But they have come few and far between because of the ‘easy’ early schedule for the Heat. That has quickly changed, and now we’ll see how Miami fares against the better teams in their own conference.

Rashard Lewis is possibly the most consistent player for the Magic. I can’t just say ‘offensive player’ because of how active he is on the defensive side of the floor, which is shown by his 1.3 steals/game. He has 7 steals in his last 3 games. Another interesting note, Lewis set a Magic franchise record for most offensive rebounds in a quarter when he pulled down 7 against the Celtics on Thursday.

Jameer Nelson still scares me, as he is becoming an elite NBA point guard. He struggled early against Boston, and failed to score 20 points for the first time in the last 5 games. His assist numbers are constantly rising as well, especially of late. He is averaging 6.8 apg over his last 6 games. Mario Chalmers is getting a workout this home stand, facing Rajon Rondo, Nelson and then Mike Bibby on Monday. 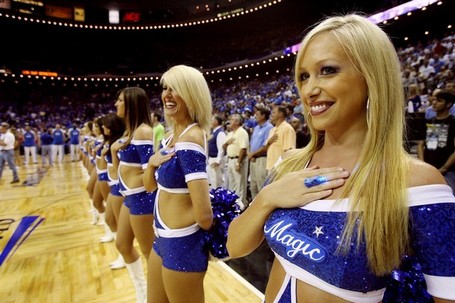 I pledge allegiance to the Stan...

Will Dwight Howard go off on Miami or will Stan Van Gundy instead decide to make it an inside-out game and utilize their supreme outside shooting. Remember the last time the Heat played Orlando? Dwight Howard had a nice little 15 point 15 board game.

The Magic and the Heat are both coming off of home losses to the Celtics in which they played ‘sloppy’ games. Maybe Boston just brings out the worst in opponents…if that’s the case then good for them! Whatever it takes to win, right?

The Magic had won 7 straight and a ridiculous 16 of 18 games before falling to Boston. Orlando has also won 10 straight over Miami dating back to the 06-07 season.

Will Shawn Marion play? He is listed by the Heat as questionable for the game, but at this point I think if he is able to, the Heat will be looking to showcase him as much as possible. Jermaine O’Neal played in his second straight game Friday night after missing 2 straight and 9 of 11. He played 20 minutes on Wednesday and 23 Friday, going 4-for-13 in the 2 games, scoring 18 points and grabbing 5 boards. He did make it to the free throw line a bit, going 10-for-14.

Atlanta spanked Milwaukee by 30 on Friday, while Detroit lost to Dallas at home by 21. Tonight, other then the Heat-Magic game, the 76ers are hosting the Knicks.