Share All sharing options for: Mourning Effects On Marion

Now that we know for sure that Zo is not playing this season, the Heat KNOW they are going to need a center.  Suddenly it’s time to re-focus on the Jermaine O’Neal trade, as so many people and press in South Florida are doing.  Even Pat Riley, when addressing the media after Zo’s retirement press conference, did nothing to dissuade the discussions about trading Shawn Marion to the Raptors for Jermaine O’Neal.

"I value Shawn Marion immensely," Riley said. "He is a tremendous player. I'm sorry this is going on right now, but that's the NBA business."

Riley added that he has spoken with Marion about the trade talks, adding that both understand the business and ‘ways’ of the NBA.

Now we’ll go into what could happen should the trade go down.  Obviously O’Neal would slide right into the starting center position, which will mean either Joel Anthony or Jamaal Magloire will lose nearly all their minutes.  I don’t think it will be either at first, as they will be used for specific situations, both being different types of centers.

O’Neal can also play the 2, but the Heat will rarely, if ever, need him to slide into that role.  Between Udonis Haslem and Michael Beasley we are pretty set, but you never know what combination Coach Spo may use.  It’s all going to depend on situations.

Another thing that should work pretty well is when the Heat go with the Mario Chalmers/Dwayne Wade/Daequan Cook lineup.  The speedy and accurate shooting trio will do much better with both Udonis Haslem and Jermaine O’Neal down in the paint doing the dirty work.  With someone to draw away defenders, our shooters will get more open looks, as well as more room when driving because defenders will be more inclined to stay at home with Haslem and O’Neal out there.  Not so much attention being paid to Joel Anthony when he is on offense…

WHO FILLS IN FOR MARION? 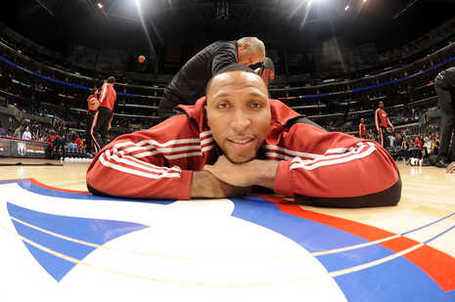 The ideal guy is James Jones, but his comeback is being handled very gingerly by Heat coaching staff.  While over his career he hasn’t scored as much as Marion, he is a much more reliable outside shooter, which will be what the Heat need even more when they finally have a presence in the paint.  Marion is also a better defender, but Jones has been improving his D over the past couple seasons and working with the defensive minded Keith Askins will certainly help.

I think Jones could be getting more minutes right now if the Heat ‘needed’ him out there, but if Marion goes there will be a gaping hole in the starting small forward position, and James Jones belongs in that slot more then Yakhouba Diawara.  Dia has shown he can fill in ‘short term’ for Marion but can he do it consistently?  I would have to guess no, but wouldn’t mind being proven wrong.

The bottom line is that the Heat NEED a center if they want to be a legitimate contender.  There is no way they will get through the Playoffs without matching up with the teams in the East with true centers (Boston, Orlando, even the Bucks and Nets have solid guys at the 1 that can dominate the Heat).  Even if this trade goes away, there will need to be some kind of move done by Miami if they want to not only have a chance in this year’s playoffs, but future seasons as well.   The way it looks, Shawn Marion is not the answer as to what is best for this team.  We need a center…we need Shaq back.

On a side note, this season really shows you how Shaq had no intention of playing last for the Heat last year.  He looked like he had nothing left in the tank, and this year he is back to form.  Nice…