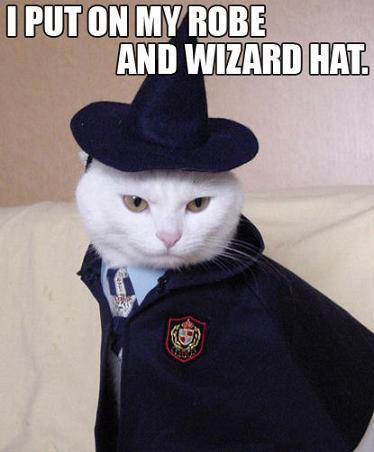 The first quarter was a little scary, but sometime during the beginning of the 2nd quarter the Heat found their groove and never looked back, beating the Wizards easily at the AAA.  It was miraculous, but somehow the Heat found a way to win despite Mark Blount not getting any minutes for the first time in 3 games.  I also think it’s safe to say that Mario Chalmers has broken through that ‘rookie wall’ we were hearing so much about.  He had his 5th straight solid game, with 10 points, 6 boards, 5 assists, 3 steals and a couple big 3’s that helped put the game away in the 2nd half.

KEYS TO VICTORY On a night where the Heat stumbled out of the game, it was a night of ‘runs’ that would lead to salvation.  It took runs of 10-2 in the 1st quarter and 11-2 in the 2nd quarter to erase a 7-point deficit and give the Heat a 2-point halftime lead.  Then in the 3rd quarter the Heat went on 13-2 run to stretch their lead to 10, and then in the 4th quarter they put the game away with a 10-0.  Overall, they finished the game outscoring the Wizards 44-21. However, this game was not won on the offensive side of the court.  Not if you are asking Coach Spoelstra, who when asked about the Heat’s great offensive plays, immediately looked to the defensive stops that lead to the opportunities.  The Heat played some amazing D for the 2nd straight game, holding both the Hawks and the Wizards under 80 points, the lowest amount of points the Heat have given up in a 2-game span all season, and the first time since 2005 they’ve given up 80 or less in back-to-back games.  The 71 points scored by the Wiz tonight was a season low for them, as well as a season low given up by the Heat.  THINGS TO CONSIDER Michael Beasley and Daequan Cook both came off the bench in a big way for the Heat, especially in the 2nd quarter.  Beasley scored 7 straight points for the Heat and 10 in the quarter, and "Dae-Dae" hit 2 big 3’s just before the half.  Both finished with 16 points; Beasley added 7 rebounds and 3 blocks, while Cook hit 4 three pointers and had 5 boards. The Heat are now 6-2 without Shawn Marion in the lineup, winning the last 5.  Everyone insists that the Heat are better with him in the lineup, but perhaps making up for his void is what has got the players performing so great on the defensive end.  Joel Anthony had his best game in a while, playing some great defense and adding a few points as well.  He was all over the place, grabbing 9 boards, 4 on the offensive glass, and he altered at least 5 shots on D.  He also had 3 blocked shots, and while Jamaal Magloire started his 3rd straight game, it was Anthony who made the difference in the 1 spot.  This further proves that the Heat are a center-by-committee team (for the time being). James Jones finally broke out, hitting his first three pointers and getting himself involved on both ends of the court.  His 21 minutes were a season high, as were his 10 points and 4 boards.  He was really hustling on D, even when the game was no longer in question.  With the Heat up 21 late in the 4th, he was still under the rim trying to draw charges.  D-Wade was all over the court, and despite only scoring 14 points had his highest rebound total in 39 games (9 reb), had 9 assists and 3 steals in only 29 minutes.  He also had no turnovers for the 2nd time in a week, leading me to believe he has somehow learned to be a little more careful with the ball.  GAME NOTES The Heat had 9 blocks against the Wiz, giving them a 2-game total of 21. If you are reading this, I hope you saw the ‘play of the year’ according to Tony Fiorentino.  It came with: 52 seconds left in the 3rd quarter, when Dwayne Wade stole a Javaris Crittenton pass by tipping it over his head, then saved the ball from going out of bounds by passing it to Michael Beasley at mid-court.  Beasley then passed it back to Wade going down the sideline, who in one motion caught-and-re-passed the ball (as he was falling down) to a soaring Daequan Cook for an ally-oop slam dunk.  The whole play took about 5 seconds. put up a franchise high 32 three-pointers. The Heat held Caron Butler to only 7 points in the 2nd half, and forced him into making 3 turnovers.  After a solid 1st half, he seemed to fade away as the Heat lead swelled. IN THE STANDINGS

The Hawks fell to the Knicks at the Garden, which brings the Heat to within half a game of and also brings the Knicks into a virtual tie for the 8th spot with , who lost at .  The Pistons won in and remain tied with the Heat.  The Sixers won a big game in and moved 2.5 games ahead of the 8th seed, but still trail the Heat and Pistons by 3 games.

Tomorrow night the Cavs play in in the only game featuring Eastern Conference opponents.  The only other game is the Spurs at the Suns…both games are on TNT.  ON THE HORIZON 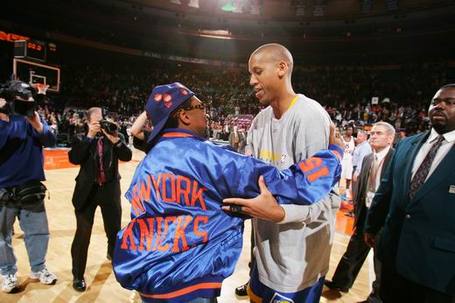 Double purpose pic: Reggie Miller reference and thanks to the Knicks for beating Atlanta last night

The Heat are now heading to for the first of back-to-back games this weekend.  Friday night the Heat will try to win in Conseco Fieldhouse for the first time in 13 tries, then on Saturday night the Mavs come to for an 06 Finals re-match.