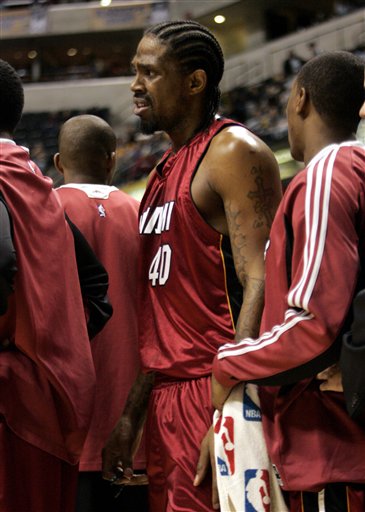 It was as ugly a Heat game as I can remember. Their defense…not there. Effort…not there. And after Udonis was ejected 3:03 into the game, both of our starting forwards were not there as Shawn Marion sat out again due to his injured groin. The Heat just looked lost tonight on both ends of the floor, and its this kind of game that reminds us that the Heat are still a work in progress. That being said, they are still a great team in the East and should be right there in the race for the 4-seed, and the fact that 3 of their best players (Cook, Beasley, Chalmers) are still just entering the league, the future in Miami is brighter then Burnie’s hair.

KEY TO VICTORY You can give a nod to Mike Dunleavy and his 30 points, or the fact that the Pacers shot 15-of-31 from beyond the arc. The 66 points given up in the 1st half was a bit of a shock to me, but that will happen when you aren’t at full strength. Missing Marion can be overcome, but with Udonis getting tossed and with Chalmers getting into foul trouble prompting the entry of Chris Quinn only hurts your defense even more. THINGS TO CONSIDER Daequan was off tonight, starting the game 0-for-6. I guess it is now unacceptable for Cook to score only 11 points and hit only 2 three’s. Mark Blount entered the game and provided instant offense, even hitting a couple three’s. However, its his lack of D that costs the Heat when Blount is in the game. Opposition attacks the paint mercilessly, causing the Heat to hack and foul, which is exactly what happened last night. The Pacers shot 24 foul shots in the 1st half. Michael Beasley came in for Haslem and it seemed he would have a great night, hitting back-to-back 3’s for and scored 8 of his 10 1st half points in the second quarter. Then he all but disappeared in the 2nd half, and sideline scouts were reporting that he looked quite winded, especially at the end of the 3rd quarter. A little more on the tossing of U-D…it all started because he was arguing a real weak foul in which he was following his man around a screen. There was no contact other then Haslem’s hands, but the foul was called. Udonis then argued the call as Michael Beasley came into the game, and was given a T. Then as Haslem was walking away he turned back and said something and was given another T. On a night where the refs were quite whistle happy, you would think they would give a little leeway to a captain arguing his 2nd personal foul, especially on such a weak foul call. QUICK TURNAROUND

The Heat are going to have a real quick opportunity to erase Friday’s poor effort because the Mavs are coming to town for an 06 Finals re-match. has been a very inconsistent team this year, especially considering their pre-season expectations. WHO TO WATCH For this year its been the Dirk and Jason show, sometimes featuring Josh Howard. Dirk is having his usual sick year, and Jason Terry has been amazing coming off the bench for the Mavs. I’m sure you remember the way Terry played in Game 1 of the 06 finals…he’s found a way to play that way almost every night. Outside of that trio, the Mavericks aren’t very deep so the Heat will need to exploit the non-featured players of .

The Hawks beat the Nets, while the Pistons lost to , meaning the Hawks moved to 1.5 games ahead of the Heat and Pistons, while continues to freefall out of the playoff picture, now tied with 1 game behind the Knicks. Also, the Sixers and Bucks both won last night.