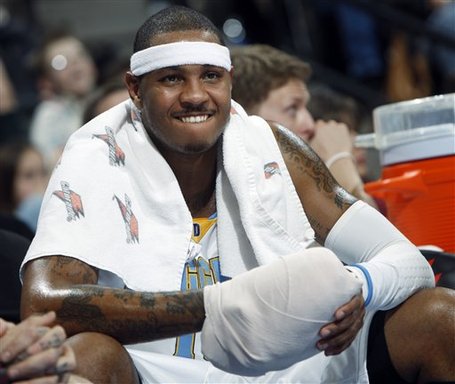 Miami is heading to the circus, and on a side note, they will be playing the Nuggets tonight as well. The circus surrounding Denver’s big star Carmelo Anthony and his broken right hand that will keep him sidelined for a month. Will the Heat be able to take advantage of Denver’s misfortune? Denver has been playing well recently, wining 4 in a row and 6 of their last 7. They are also 13-4 at home.

Kenyon Martin is the Nuggets version of Udonis Haslem (on the court), with a twist. Martin can also hit the 3 on occasion, but has been commended for his hard work this year and has been on fire of late. On the year Martin is shooting 51% and 53% from beyond the arc. And when ‘Melo went down last game, Martin came back with his highest point total in 6 weeks (25) while grabbing 7 boards and turning the ball over only once, something he has had troubles with during the season.

One of the Nuggets most consistent players this year has been their center, Nene. He has no problem pounding down underneath the rim, and is very versatile on defense. And over his last 4 games Nene has been scary good, shooting 75% from the field on 30-of-40 shooting, while grabbing 33 boards, blocking 6 and grabbing 4 steals. Production across the board = scary.

Denver has been solid throughout the year and holds a 3-game lead in the Northwest Division, but there are some uneasy feelings with some on the Nuggets roster. Several players are upset with the team’s lack of a ‘killer instinct’ and it has become an issue of late. In their last 4 games Denver has held a double-digit lead and almost blown it every time. We are talking 20+ point 1st half leads that shrink down to almost nothing. Take that and combine it with the injury to the teams leader and there could be some major problems in Denver.

If the Heat can come out and smack Denver in the mouth, it could keep this fragile Nuggets team down. They have been shaken on many occasions, especially during their recent ‘bad spells’ and while they are still winning games, nobody is more aware of their struggles then the players are. And believe me, I am sure the Heat are completely aware of this. Coach Spo has a bit of that ‘killer instinct’ himself, as we all have seen throughout this season. The Heat should come out attacking on offense and playing the aggressive style of defense that forced numerous turnovers against the Spurs on Monday.

We also get Ira’s take on the Heat’s releasing of Shaun Livingston.