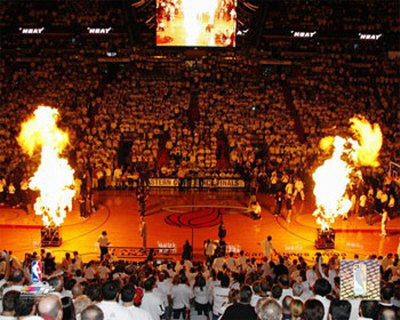 For the first time in what feels like forever, the Heat will play a game in front of their home crowd.  How much of a crowd is another story, but we'll find out soon enough. Either way, it's nice to get the feeling that basketball season is just around the corner.  This could be the best time of year, when all four of the major sports are going at the same time.

Tonight the San Antonio Spurs come to town, but they will face the Heat without their superstar.  Dwyane Wade suffered a strained muscle in his rib cage sometime during the Heat's loss in Orlando on Wednesday, but an MRI taken on Friday showed no major damage.  Wade even said that if it was a regular season game he'd very likely be in the lineup, but no need to take any chances in the preseason.

"It's preseason. It just felt weird. It's a precaution and not overly serious," said Wade, "We got a long season ahead of us so I'm not trying to be a hero right now."

There will be a couple other Heat regulars out of the lineup tonight, as Chris Quinn and Jermaine O'Neal will also be sitting this one out.  Quinn suffered a strained right foot during practice on Friday and will be wearing a protective boot for at least a week.  As long as it's nothing serious, this is cool with me.  I wanted to get a look at John Lucas III against some non-scrubby opponents.

O'Neal sat out practice again on Saturday with his bruised left foot and will be a game time decision.  He has missed almost half of the Heat's workouts and practices since the preseason began last week.

Despite both teams being without their starting shooting guards (Manu Ginobili is also sitting this one out), several Heat starters will have very tough matchups to face against the Spurs.

Mario Chalmers will have a hard time breaking out of his defensive funk against Tony Parker, who is already playing like it's the regular season.  Michael Beasley will be lined up against Richard Jefferson at small forward, which should be a great way to judge how far Beasley has come on the defensive side of things over the past few weeks.

We'll also see if Udonis Haslem can stay out of foul trouble for the first time this preseason against Tim Duncan, who never seems to have trouble drawing fouls (and complaining about the ones that don't get called).

For more Heat-Spurs information head on over to Pounding The Rock, SBN's Spurs blog.  Really good position by position preview over there.

Everyone enjoy your Sunday!