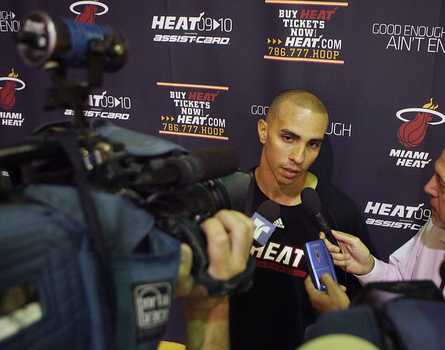 As you can probably imagine, pretty much all of the attention surrounding the Heat has been dedicated to ‘the new guy', Carlos Arroyo.  Since joining the team on Tuesday, he has been impressing in practice with his passing and overall offensive savvy.  Anybody who has seen Arroyo play in the past knows that he can create for himself and his teammates, and I for one am really anxious to see how it looks with Carlos and D-Wade on the floor together.

Obviously, the most effected player is Mario Chalmers, who for the first time since joining the Heat has someone to push him at his position.  Michael Beasley thinks that this is a great thing for Chalmers, as Beasley has had Udonis Haslem to push him, learn from and fight with for minutes.  Said Beasley:

"Some of the guys who have been in here - not to downgrade guys, but - (Chalmers) has been a landslide better than them.  Carlos can do it all. (Chalmers) not only has somebody to go head to head against, but somebody to look up to and to learn from."

The Heat now take their 0-3 preseason record into Oklahoma City for the first game of a back to back that will take them to Kansas City tomorrow to play the New Orleans Hornets.

The Thunder are expected to play starters Kevin Durant, Russell Westbrook and Jeff Green at least 30 minutes each, as this is the first time that they are playing in front of their home crowd.

As for the Heat, it's still unknown whether Dwyane Wade will play, but he has been practice the past few days (wearing a yellow ‘non contact' jersey) and made it seem that his injury was getting better.

Jermaine O'Neal expects to play in both games this week after missing the Heat's previous two with a foot injury.  He really needs to get some NBA level conditioning under his belt in order to get his timing back, so hopefully we'll see him playing regularly all the way up until the home opener on October 26th.