Share All sharing options for: Michael Beasley looks great and Heat continue to improve in late loss to Thunder 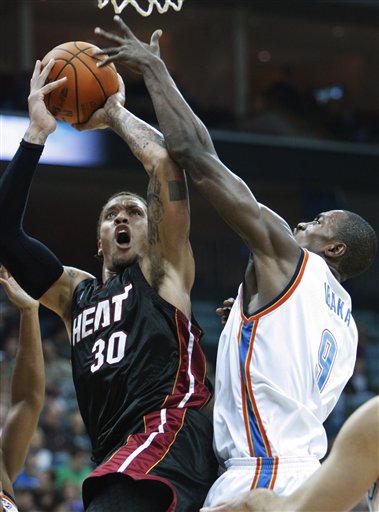 The positive progression continued for the Heat, and that is much more important then the final score.  You'll have to forgive me if I'm paying more attention to the way our guys preformed then the results of the game, but quite frankly its just not that important.  Sure, it'd be nice to win...but as long as our players keep progressing and appear to be improving, I'm happy.

The Heat dominated this game for 3 quarters thanks mostly to Michael Beasley, who keeps getting better as he gains confidence (which I think is key for Beas).

He started the game at small forward, but was moved to the 4 during the 1st quarter.  The Heat went with a small lineup several times which had Beasley at power forward and Haslem at center.   Overall Beas played 38 minutes, scoring 24 points on 9-of-13 shooting.  He added 4 boards, 2 assists, a steal and a block, and also went 6-for-6 from the line.

Udonis Haslem played the 2nd most minutes behind Beasley (35), and was productive without being flashy.  9 points and 9 rebounds for U-D, who was also perfect from the foul line (3-for-3) and had 2 blocks.  Hopefully the Heat can go with the small lineup more then not until Jermaine O'Neal gets his stuff together.  In 23 minutes for O'Neal, he scored 10 points but only registered 3 rebounds.

Those are numbers that are all too familiar for Jermaine.  Last year in 32 games with the Heat he averaged 13.9 points/game but only 5.4 rebounds/game.  Of those 32 games O'Neal only registered double digit rebounds in 3.

D-Wade may play tomorrow night in Kansas City against the Hornets, where hopefully we'll continue to see more progress from the team as a whole.

Quentin Richardson had a rough night shooting the ball, which is no shock to me.  I think he will be at his best when playing with Dwyane Wade, who will allow Richardson a little more freedom and more open looks.  ‘Q' finished with 11 points on 4-of-11 and added 3 boards, 2 of which were offensive.

James Jones was much more productive in fewer minutes.  He played only 15 but showcased the sharp shooting that we'd been seeing from him throughout training camp.  3-for-4 from the field and 2-of-3 from beyond the arc for James, good for 8 points.

Carlos Arroyo played only 16 minutes and didn't stand out a whole lot, but that is ok.  He wasn't burned on defense and made a couple nifty passes.  He's still got some work to do in learning the Heat's system, but for now Arroyo should be fine.

Daequan Cook continues to provide offense and is creating for himself off the dribble with his much-improved ball handling skills.  He had an ‘off' shooting night in his 30 minutes, but his 5-of-15 from the field doesn't seem as bad when you factor in his going 4-of-7 from beyond the arc.  His 15 points came with a rebound, an assist and a steal.  So far in this very early part of the season, it seems that Daequan will be our breakout player.  I think we all know how lethal this guy can be...so I'm kinda excited to see how this continues to develop.

As a team our shooting was by far the best of the preseason.  The Heat shot 49% from the field and an awesome 94% from the foul line (17-of-18).  I'd like to see about 10 more free throw attempts by Miami, but you can't complain a whole lot when they only miss one.

For the 2nd straight game Miami out-rebounded their opponent.  Last night they won the battle 32-30, and on Sunday they out-grabbed the Spurs 40-37.   The good thing is that the majority of those rebounds are coming from our regular guys, not the backups and guys just trying to make the roster.

Tomorrow night tipoff from Kansas City is set for 8:30pm.  The Hornets are 1-3 in the preseason and are giving up 104 points/game.  Hopefully the Heat's offense will continue to improve against a team which obviously struggles defensively.