Heat youngsters leading the way as team continues to get better

Share All sharing options for: Heat youngsters leading the way as team continues to get better 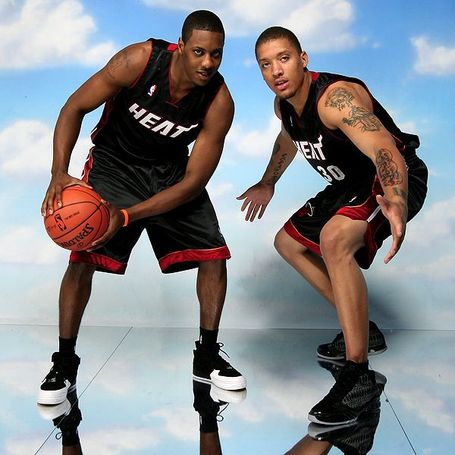 With the Heat grabbing their first win of the preseason on Thursday night, you have to wonder if the improvements will continue all the way up to Opening Night, or when this steadily rising Heat club will top out.  For now I have to figure things will keep looking brighter, mainly because there have been so many little injuries that players are still getting back into their grooves, getting used to new roles and new teammates.

Jermaine O'Neal had his best game by far on Thursday, and hopefully it's a sign of things to come for J-O.  After grabbing only 4 total rebounds in his first 2 games, he snagged 5 against the Hornets in just 21 minutes, and added 9 points and 3 blocks.

D-Wade returned to the lineup and looked just fine as far as injuries go, but there is still some rust to work off.  He moved the ball very well early on, racking up 5 assists in the 1st quarter.  He finished with 14 points on only 5-of-13 shooting and provided a scary moment when he tripped during a ‘breakaway layup' attempt, later holding his knee while limping to the bench during a time out.  It's a bruised left calf, nothing serious, and he should be fine.

After the jump I took a look at how well the Heat have played over the past week, which covered 3 preseason games.  Some key players have been steadily improving, while D-Wade still has some work to do.

Miami's first two preseason games were pretty bad as team combined to shoot only 35% from the field while losing both handily.  Since returning home to face the Spurs, the Heat have been shooting the lights out while still working hard on both ends of the floor.

Looking at the past three games, a few guys have really stepped up but the team as a whole has excelled as well.  The team is shooting 46% from the field and 40% from beyond the arc while grabbing 37.3 boards forcing 15 turnovers.  Their free throw shooting is still something to work on, although in their back-to-back road games this week they made 31-of-36 (86.1%) from the charity stripe.  Hopefully they can build on that.

The guys who have seemed to turn a corner the past few games are none other then our young core; Beasley, Chalmers and Cook.  All three have been consistently good all week, none more encouraging then Mario Chalmers.  He was facing a lot of scrutiny after a poor start to the preseason, but has responded in a big way.  Maybe a little competition at the position is just what the Dr. ordered for Rio.  Chalmers is shooting 55% from the field in the past 3 games, scoring 13.3 points and dishing out 4 assists per game.

Daequan Cook has not only been a major threat from downtown, but he has also become a much better ball handling guard, which has allowed him to create many more opportunities for himself and his teammates.  More open looks for Daequan seem to be having a huge effect on his game (as it should).  After going 0-for-6 from beyond in his first game, he's been on fire in the last 3.  How does 45% from the field and 55% from 3-land sound?  About as good as 16.3 points in under 30 minutes for the 3rd year shooter from THE Ohio State University, who looks to be poised for the breakout 3rd season we were supposed to be getting from Ted Ginn.

The 3rd leg of the youngster tripod is Michael Beasley, who has been leading the Heat throughout the preseason without missing a game, but has taken it up a notch in the past week.  He's shooing 51% in his last three games, averaging 17 points and 7 boards/game.  Regardless of whether he's playing the 3 or the 4, the scoring touch is always there for Beas.  Defensively its still a work in progress, but he is setting up for an exciting season along side D-Wade and his aforementioned young sidekicks.

Looking at the Heat's 3 best outside scoring threats, James Jones, Quentin Richardson and Daequan, we see that they have all been shooting well during the preseason.  In 3 games, Richardson has gone 6-of-13 (46%) from 3-point range.  In 4 games, Jones has gone 7-for-13 (53%) and Cook has gone 11-for-26 (42%) but keep in mind that Dae Dae started out going 0-for-6 in the preseason opener.

It seems that a lot of the components we spoke about before the season that the Heat would need to be successful are working out quite well.  Considering that its still only the preseason and generally players seem to get better and better during this time period leading into the season, Heat fans can start to get excited.

One guy who has ‘struggled' somewhat is Dwyane Wade.  I'm not saying that he is playing poorly, bad or anything resembling those negative descriptions...only that he has struggled, meaning we still have lots to expect from our leader.

He has played in 3 preseason games so far, averaging only 16.3 points on 38% shooting (in about 25 minutes a game).  He has gotten to the foul line only 7 times/game, which is low for Wade, and even worse he has made 66% of his free throws.  He's gone 1-of-5 from 3-range with the 1 coming from his 1st shot attempt during Thursday's game against the Hornets.  Wade has also racked up 8 rebounds, 13 assists, 5 steals and a block in his 3 games so far.

Now I'll reiterate that this is nothing to freak out about; it's very early and Wade has been dealing with some nagging injuries.  Dwyane has spent a ton of hours over the past several years working on and improving his jumper, and this summer was no different.  I have no doubt that he will bounce back, but in the meantime his poor shooting is something to monitor.

The Heat have a few days to practice and rest up, with a few guys happily taking the time to heal some nicks and bruises.   Their final home exhibition game is Wednesday night against the Memphis Grizzlies, and then on Thursday Miami will meet the Hawks in Jacksonville for the final game on their preseason schedule.