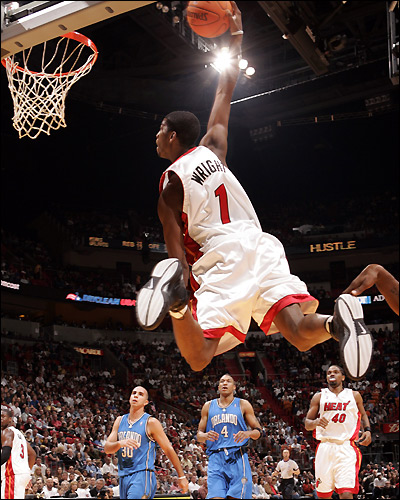 We'll get started with a name you probably weren't expecting to see, especially leading off a blog entry.  Dorell Wright has been impressing players and coaches thus far in camp, moving the ball much better then in the past.  He has always been able to hit jumpers, but the knocks on Wright have been his inability to drive the ball well and that he turns the ball over way too much.

While I haven't heard anything about him driving the ball, it seems that he has greatly improved his passing and ball handling.  Also, he seems to be developing some chemistry with his fellow Heat players, especially when working with Dwyane Wade and Quentin Richardson.

"He's been passing the ball very well," teammate Dwyane Wade said Friday. "D-Wright has always been a guy who's looking to pass, but he's had a lot of turnovers in the past trying to force things. Now, he's not forcing as much. He's hitting the open guys a lot more. He's hitting guys a lot quicker. So it's been nice."

"The chemistry is definitely there," Wright said. "When we're out there, we look pretty good."

This leads us into our next topic, which is the battle at small forward.  Many believed that going into training camp James Jones was penciled in to be the starter, as he was during the playoffs last spring.  That is far from the case as after only a handful of practices there seems to be a logjam on the depth chart.

Michael Beasley is battling for minutes at small forward as well, and apparently is doing a decent job.  Personally, I think Beasley would be much better off sticking with playing power forward, but reports are coming out that he is looking better and better at the new position.

Now the Heat have six guys battling for minutes at small forward.  Jones, Beasley, Richardson, Wright, Diawara and Daequan Cook.  I'd love to give you more information on why Cook is working at the 3 and not the 2, but there is none.  My best guess is that the Heat coaches are looking to spread things out and try to create mismatches whenever possible when trying to battle their way through a very tough Eastern Conference.

BLAME IT ON RIO

Switching to a position where there is no battle going on, Mario Chalmers is still trying to push himself despite having nobody breathing down his neck, trying to take his job.  He knows just as well as anyone that he has a lot of room to improve, and is looking to achieve his goal in becoming one of the leagues elite point guards.  Yes, he still has a way to go.  Playing a full season at the same high level would be a great start, as would improving his off-the-dribble defense.

``I'm still a nobody in this league right now -- that's how I look at,'' Chalmers said after Wednesday's practice at American Airlines Arena. ``So to me, it's a lot of competition. I'm trying to get star status in this league, trying to be recognized as one of those great players that you have to worry about on game night. That's my drive.''

Chalmers knows just as well as we do that he is the guy for the Heat.  They passed on guys like Allen Iverson and Jamaal Tinsley, and Pat Riley has come right out and said that Chalmers will be their starter and even if they had brought someone in, they wouldn't have started over Mario.  He'll be looking to improve on his numbers from last year; 10.0 ppg, 4.9 assists/game, 2.8 rebounds/game and 2.0 steals/game.

Don't worry...you can still follow Dwyane Wade, Mario Chalmers and Michael Beasley Daequan Cook on Twitter, just not while they are working.  The Heat have told their players that they can no longer participate in ‘social networking' while at work, meaning anytime they are at the arena, home or away.

"We'll have strict rules on it," Heat coach Erik Spoelstra said Monday at the team's media day. "The NBA has put in strict rules about it. Social media, we will not accept that in our building during office hours. That's the way we'll look at it when we're coming to practice, to shootarounds and to games. We're coming to work and we're coming to get a job done. That's not time for social media."

One injury to report, and let me preface by saying that this is nothing major, AT ALL.  Jermaine O'Neal sat out practice on Thursday with a sprained ankle, but was expected back at practice on Friday and is expected to play in Monday's preseason opener in Detroit.

``It's a little bruise -- not worth wasting ink over,'' said O'Neal. ``Since we had only one [practice], they figured we'd rest and get ready for the next couple days.''

There was nothing I could find saying whether O'Neal returned to practice on Friday or not...but I imagine that if he had not returned as expected, we would've heard something.

And speaking of Monday's game, Coach Spoelstra said today that he'd like to play his veteran players (D-Wade, Jermaine O'Neal and Udonis Haslem) about 24 minutes.  That will likely be the case throughout the preseason, as the Heat will want to keep their big guns fresh, as well as see what the rest of the crew has to offer against NBA caliber opponents.