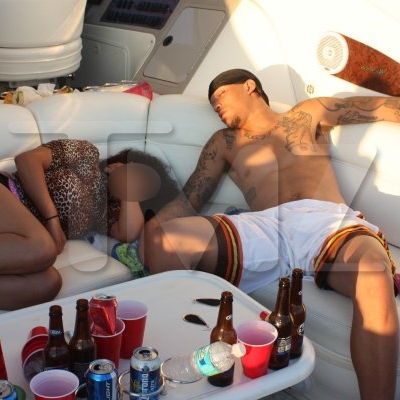 Michael Beasley just can't stay out of trouble.  This time the pictures are from a Heat team fishing outing that took place on October 10th, and they show Beasley sleeping next to a table with open beer bottles and cans. The team, all witnesses from the event and even the boat's captain all deny that Beasley had anything to drink.

"At no point did Michael consume or even touch any alcohol. The entire time he was accompanied by his advisor. It was my understanding that his advisor was trying to help get Michael out of the seclusion that is associated with a rehabilitation similar to what he had gone through," Captain Taft Sibley wrote in an e-mail to the team.

Beasley himself even came out and disputed that he had been drinking, explaining that he is taking his recovery seriously and enjoys his substance-free life.

"[It was] the fishing trip gone bad or my bad, because it was after practice and I was tired," Beasley said after Saturday's practice at AmericanAirlines Arena. "That sun was beaming down; it was the hottest day in the world. . . . Fell asleep ain't the word.  I don't drink. I don't smoke anymore. My sobriety date is 8-6-09."

Beasley is not going to be diciplined by the team and is not expected to face any kind of action from the league, which would be a third-strike suspension for violating league substance-abuse policy.

For the full TMZ story and pictures, click here.