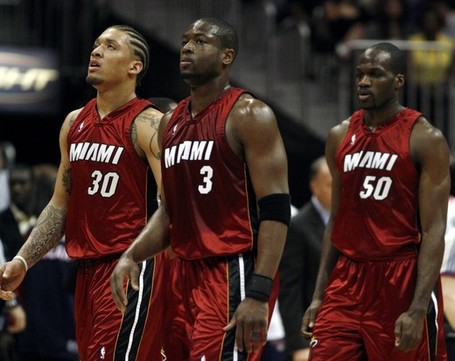 Dwyane Wade is ready to lead his troops into battle

Tonight the Heat will begin their march towards what we hope will be at least a trip to the  2nd round of the playoffs, and we get to do it against the hated New York Knicks.  The Heat will also retire Tim Hardaway's #10 before the game, so if you have tickets and would like to see the banner go up, I suggest getting there at least 30 minutes early.

On to the game, where the Heat's starting lineup will be without a familiar face; Udonis Haslem will be coming off the bench and Michael Beasley will get the nod as starting power forward.  Starting at the 3 is newcomer Quentin Richardson, but I'm also hoping for a steady dose of James Jones.

I was hoping that Beasley would stay at the 4, which is where I feel he belongs.  He is going to end up one of the best power forwards in the game, so why hinder that by forcing him to learn another position that he'd only be playing temporarily.  It sucks for Udonis, as he is in a contract year and most likely will not be returning to the Heat next season.  Haslem would want to use this year, as would any soon-to-be free agent, to showcase his skills, and now he will have to do that in a reserve role.

It could work out well for the Heat, as they will be getting just as solid an option off the bench as if they had kept Beasley there, but with Haslem you can plug him in during those times where the premium is on defense, as U-D is still a much better defender then Beasley.   Haslem, as always, would do his best to find the positive out of the situation:

"I've learned a lot of valuable lessons, and one of the valuable lessons that I've learned is don't worry about things you can't control," Haslem said. "That wasn't in my control. I didn't make that call, so that's nothing I'm going to worry about.  I've been the ultimate team player; I've made the ultimate sacrifice throughout my career. It's just another situation where I've been asked to do it again."

The Knicks will throw a couple solid players at the Heat tonight in Chris Duhon, Al Harrington and Mr. Double double David Lee, but New York has the same mentality as the Heat, planning for the summer of 2010.  Unfortunately for the Knicks, they don't have Pat Riley to produce a team that can still win more then they lose, so expectations for the Knickerbockers this season are not high.

Nate Robinson can electrify any crowd, but the Knicks lack of any superstar players will really hurt their team of supporting cast guys. There has already been speculation that fed up Knicks fans will lose interest quickly and that attendance numbers will drop, but 2nd year coach Mike D'Antoni is hoping that fans will be patient and that the team will keep them interested:

I'll tell you one thing right now; the Heat will have to look pretty damn bad to not come away with a victory tonight.  The Knicks are a very poor defensive team and don't have any kind of go-to guy on offense.  The Heat have D-Wade, Beasley and a bunch of guys who can shoot the lights out coming off the bench.

Hopefully the Heat will have prepared for the Knicks up-tempo offensive style, otherwise this could become a shootout rather quickly.  If Miami can slow down the Knicks and keep this to a half-court game then they will be fine.

For a Knicks perspective on things, head over to Posting and Toasting, SB Nations Knicks blog.