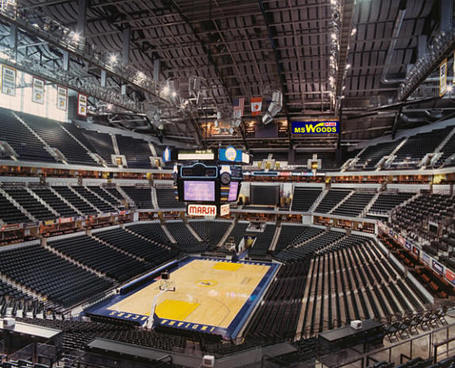 After a convincing victory on Wednesday at home, the Heat will try to go 1-0 on the road tonight in Indiana.  This potential victory could be big for the Heat for more then one reason; Miami has not won in Indiana since December 31, 2001, a streak of 15 games.  Also, the Heat haven't opened a season with back-to-back wins since 2004-2005 when they started 4-0.

Jermaine O'Neal is particularly excited for this game.  Even though it's going to be the big guys third time returning to Conseco Fieldhouse after leaving the Pacers, it's the first time he has been there feeling healthy.  He says that he hasn't been this healthy in 2½ years and has been looking forward to playing without knee braces.

After his amazing game against the Knicks on Wednesday, O'Neal may have set the bar that much higher for the expectations that Heat fans have for their center.  If he can stay healthy the sky is the limit for the former all-star, and as we have said before, he is definitely the wild card for the Heat's season.

"I felt good and I felt good the previous the previous three or four days in practice," he said after Thursday's practice. "I'm not going to say, by any means, that I've arrived. It's only one game.  I'm not going to be able to jump as high as I was jumping at 23, but I'm pretty sure anybody that was drafted in my class can tell you they're not jumping and running as fast. But I feel good."

For an Indiana-ish look at the latest Jermaine comeback, check out this article from The Indianapolis Star.

You have to figure that we'll see some of James Jones maybe even a splash of Dorell Wright tonight, as Erik Spoelstra has said he wants to get all of his players involved in the rotation.  It's a great thing that the Heat can mix it up with their players, as Pat Riley has put together a team full of steady, reliable players that make this Heat bench very deep.

Turning our attention to the Pacers, they are a group coming off a very sloppy first game of the season in which they turned the ball over 25 times in a loss at Atlanta.  That was pretty much the difference in the game because both teams shot over 50% from the field and from 3.  Coming into the season, the Pacers were boasting a new and improved defense, but that was not the case against the Hawks, so look for Indiana to come back against Miami with a major emphasis put on D.

Maybe more importantly, Indiana can also be a very explosive offensive team so the Heat will have their hands full, but we saw on Wednesday that Miami can control the tempo of a game with their good ball handlers and solid shooting.  This is one of those games that if the Heat don't bring their ‘A' game, it will be over in a hurry.

Quentin Richardson will get his first real test defensively against the Pacers budding superstar Danny Granger, who despite being slowed by a foot injury still managed to put up 31 points (including five 3-pointers) against the Hawks.  Granger has really evolved into the total package both on offense and defense; the ideal fantasy basketball player (I hope, lol).

Tipoff is 8pm from Indianapolis.  For a Pacers perspective head on over to Indy Cornrows, SB Nations Pacers blog.  Here's to breaking one streak and starting a new one...LETS GO HEAT!!