Share All sharing options for: Jermaine O'Neal and Dwyane Wade end the curse of Conseco as Heat move to 2-0 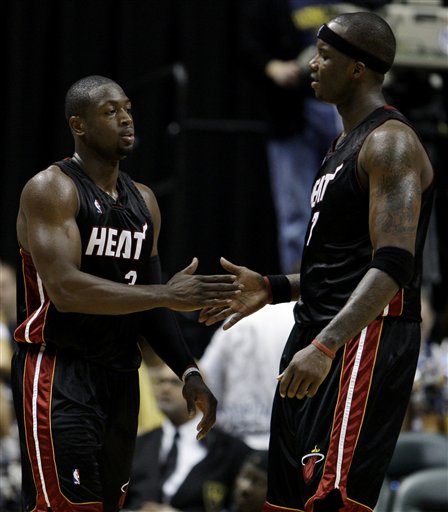 It's starting to look like this years edition of the Miami Heat are going to turn some heads around the league. Of course I realize it's only been two games, but in those two games there is much to be excited about. As a team the Heat are playing ferocious D, holding the Knicks and Pacers to shooing 38% and 36% respectively and out-rebounding both teams.

The brightest individual star has been Jermaine O'Neal, and he was poised for a big game in his old stomping ground. You knew that he was going to come out wanting the ball in his hands, but the effort wasn't the question. The production was there for J-O as he opened the scoring for 2nd straight game and got to the foul line two times in the first few minutes. He also continues grabbing boards like crazy; he had 4 in the first five minutes.

After a 7 point 5 rebound first half, Jermaine played the entire 3rd quarter and dominated the entire thing. 14 points and 4 rebounds later, the Heat were up big and O'Neal was on the border of his second straight 20-10 game. He finished with 22 points and 12 rebounds (same totals as against the Knicks).

After losing a 12-point lead late in the 2nd quarter, the Heat came out in the 3rd and completely overwhelmed the Pacers. Miami started the half going 6-of-8 from the field and 6-of-7 from the line, a 16-4 run that led to a 16-point lead heading into the 4th.

Quentin Richardson is impressing the hell out of me with his defense. This is a guy who has been known much more for his offense, but is quickly showing why Erik Spoelstra gave him the starting job. Knowing what he can offer on the offensive side of the floor, it's amazing to see what he is doing on D. He did a great job on Danny Granger throughout the game, and drew a big 4th quarter charge on the Pacers star.

We could have the best power forward tandem in the NBA. They were both all over the glass, with Beasley grabbing 9 rebounds and Haslem coming down with 10. They each shot 4-of-9 from the field as well. The most impressive thing about Udonis' double double is that many of his minutes are with ‘supporting cast' players as opposed to Beasley who gets minutes with the ‘A-Team'. Oh yeah, and Haslem had a REDICULOUS dunk over Solomon Jones.

While his numbers haven't been particularly staggering, I've been very pleased with how Mario Chalmers has been manning the point and running the Heat's offense. He had 6 assists tonight and 4 against the Knicks and hasn't shown to be the defensive liability that he was last season.

One thing that I always seem to do when writing these things is pay so much attention to the ‘other' guys that I totally forget about Dwyane Wade (I know, wtf is wrong with me). He was all over the court, hitting outside J's, posting up, coming away with 3 steals and hitting 14-of-19 free throws. He hit 9-of-19 from the field and what amazes me is how he can score 30 points (32 actually) so easily and 95% of the NBA won't do it at all this season.

Next game is Sunday at the AAA against the Bulls. The 6pm tipoff gives me plenty of time to get there after (hopefully) celebrating a Dolphins victory over the Jets.