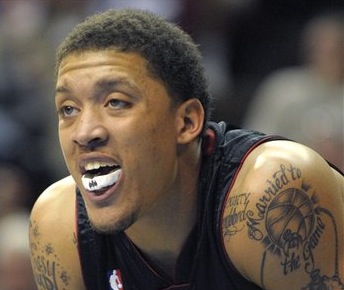 The Heat closed out training camp today with a friendly little inter-squad scrimmage.  In doing so, Erik Spoelstra indicated who he has at the top of the depth chard at small forward.  Michael Beasley will be, at least for now, the Heat's starting small forward.  Let that sink in for a minute.

Beasley worked very hard all summer and has expanded his game on both sides of the floor.  He has continued to develop his outside game and is working on his post up skills, and while his defense continues to improve, it still has a ways to go.  During the scrimmage today, Beasley was matched up against his main competition at the 3, James Jones, who got the best of Beas on several occasions.

Jones beat Beasley on a pump-fake to draw a foul. He also beat Beasley on the baseline to get to an offensive rebound. And Jones also delivered the final dagger of the scrimmage, dropping a 3-pointer over a late-arriving Beasley to lead the "white" team of backups to a 17-16 win over the "black" team of starters.

Should this be the way we go into the season, there is going to be a lot of guys competing for only a few minutes. We'll see how this experiment works out as we get closer to the regular season, but in the meantime just remember that its still very much a learning process for Beasley.

"Part of the process is learning situations," Spoelstra said of Beasley's transition between small and power forward. "The reps this summer helps. He felt comfortable. He's still learning and he'll tell you that."

"I'm just playing my position and making sure I'm rotating right and being in the place I'm supposed to be," Beasley said. "When you try (too hard) to make it happen, it's going to be a disaster. You let it come to you."

James Jones has been playing well so far in training camp, and I imagine that should Beasley keep this job, the majority of the backup minutes would go to Jones.  He and fellow sharpshooter Daequan Cook are making a point to prove that the Heat are going to be very dangerous from the outside this season.

You could say that Jones has had a chip on his shoulder about this season after the way last year played out, but with Cook, his teammates see a new demeanor in him, a maturity that comes from experience he's gained over the past 2 seasons.

"You see a different mentality in him, which is probably due to him being a year older," O'Neal said. "He wants to be better. I think he understands."

Tomorrow the Heat open their 7 game preseason schedule in Detroit at 7:30.  I know there is no local broadcast, but the game will be shown in Detroit.  That means there will be ways to find the game feed online.  Hopefully we'll get a good idea of our how team is looking after training camp.