Share All sharing options for: Heat fall to Pistons 87-83 in preseson opener 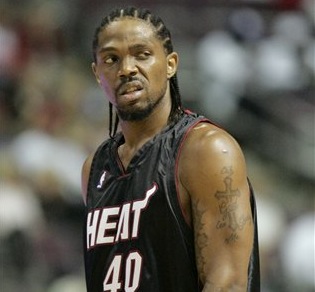 The Heat kicked off their 2009 preseason campaign in Detroit last night, and as you'd expect from a first game, there are a lot of things to work on.  As a team they shot poorly and came out flat in both halfs, and at one point in the 2nd half they trailed by 17.  Despite a noble comeback effort at the end, the Heat ultimately fell at the hand of the Pistons 87-83.  In the final 30 seconds John Lucas III had a chance to put the Heat up by 1 with a 3 and missed, then missed another jumper to tie.

Beasley started at small forward, but only lasted there for 4 minutes.  Udonis Haslem committed 2 early fouls, which prompted Coach Spoelstra to slide Beasley to the 4 and bring in Yakhouba Diawara off the bench.

Haslem was issued a technical foul when he slammed the ball down after being whistled for his 3rd foul in the 2nd quarter.  This game was refereed by replacement refs.

Jermaine O'Neal looked very similar to the guy we saw last season.  He hit his first shot, then missed his next 5 en route to a 2-of-8 night.  He only recorded 1 rebound in 21 minutes.  That is something that HAS to improve.

Overall our ‘big guys' had a poor game, getting dominated in the painted areas on both ends of the floor.  The Heat were out rebounded by 8 (40-32).

Daequan Cook seems poised for a breakout year.  He is showing much-improved ball handling skills, prompting questions to Erik Spoelstra about possibly playing Cook as a backup point guard.  He didn't seem to enthused with the idea...

"I don't know about playing him as a backup point guard," Spoelstra said. "But you can see it. His confidence level, handling the ball, is totally different than it was the last two years."

D-Wade seemed his normal self, getting to the basket with ease.  He finished with 18 points in 23 minutes on 6-of-13 shooting.  He also went 6-of-8 from the charity stripe, and had 5 assists and 4 steals.

Dorell Wright played over 20 minutes but was held scoreless, going 0-for-4 from the field and ended up fouling out of the game.  He had 2 boards and turned the ball over 3 times.

Our point guards were both pretty poor.  Chalmers constantly was beat by Pistons PG Will Bynum, and Chris Quinn couldn't keep anyone in front of him.  Quinn also couldn't help but reaching, getting called for 3 fouls in his first 4 minutes on the floor.  Chalmers only bucket was a three pointer, finishing 1-for-3 from beyond the arc and 1-of-4 overall.  Quinn missed his two field goal attempts and his only point came on a free throw.

James Jones was bothered by migraine headaches in the morning and despite dressing, didn't get on the floor.    Quentin Richardson also didn't play for the Heat.