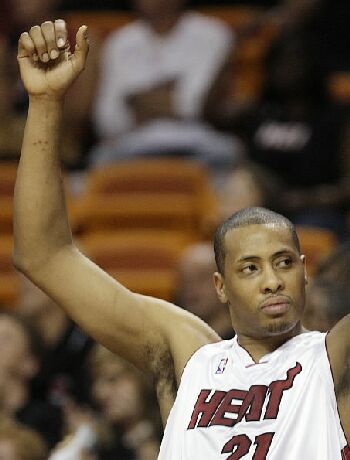 The season hasn't even officially started yet and Jamaal Magloire has already made an impact as the Heat's 'tough guy'.  The NBA announced today that Magloire will miss the first 2 games of the regular season due to his part in an altercation with Pistons rookie Jonas Jerebko during Monday night's preseason opener.

The Pistons rookie will be missing the Pistons regular season opener, but nothing more.

Magloire received the stiffer sanction for what the league termed "instigating the altercation and striking Jerebko in the face." Jerebko was suspended one game for retaliating and striking Magloire in the face. The incident occurred with 5:04 remaining in the fourth quarter of Detroit's 87-83 victory.

Magloire still says that it was nothing special and there was no intention to fight, but Kerebko insists that the two intentionally hit each other in the nose.  The NBA rules say that there must be at least a 1 game suspension if a punch is thrown.