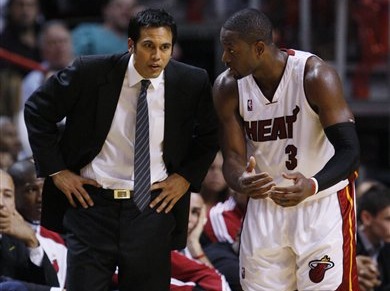 It sure feels like its been a while since the last time the Heat took the floor, but at the same time its been nice to just sit back and enjoy having one of the top teams in the NBA.  Granted, the Heat aren't getting the respect that most of us feel they deserve, but it's still very early in the year.  Should the Heat keep up their winning ways, the attention and respect will gradually shift to South Florida, so I'm not worrying myself with any of that garbage.

Tonight the Heat will go for their 6th win of the season and their 6th straight win against the Washington Wizards, who have lost 4 straight coming into tonight's contest.  This will be the 2nd game of the Heat's 5-game home stand, which they kicked off in a big way, beating previously undefeated Denver last Friday.

Leading up to the season, the Wizards we're probably the most popular choice for ‘comeback team of the year' among the wonderful national press, the same people that haven't yet started to see the Heat as a team to be reckoned with.  After starting the year two wins in three games, Washington is now 2-5 and dealing with unhappy players adjusting to a new coach.

Flip Saunders wants his team to move the ball and get open looks, but the Wizards are used to free shooting, and it starts with their captain Gilbert Arenas.  All of these passes from less then comfortable players could give the defensive minded Heat lots of lanes to steal the ball and draw offensive fouls.