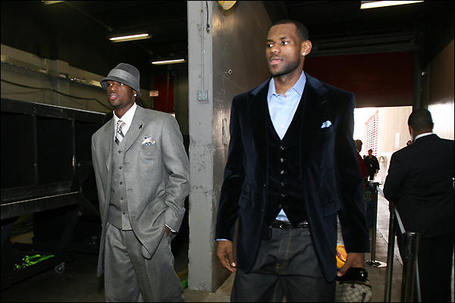 Obviously much of the attention surrounding this game will have nothing to do with the actual outcome.  In the last week there have been several articles, stories, etc. about the possibility of LeBron James signing with Miami as a free agent, teaming up with Dwyane Wade and forming a team that many are saying would rival the Bulls teams of the 90's.

Just thinking about the possibility of D-Wade, LeBron, Mario Chalmers, Michael Beasley, Daequan Cook, (maybe) Quentin Richardson....wow.  I'm sure there are plenty of good players who would be happy to play for a little less money if it meant joining a team like that.  Look, I'm well aware that it's amazingly early to be thinking about this, and that there is still no guarantee that Wade will be staying.  But as you know, I am a firm believer that Dwyane isn't going anywhere and that Pat Riley will be bringing in at least one superstar to play next to him.

After practice on Wednesday, Wade was asked several questions about King James and the possibility of the two playing together.  Here is some of what he had to say:

On if he and LeBron have talked about playing together:  "It's something that we've talked about, of course.  He's one of my good friends and we both decided at the same time to sign the same contract to give ourselves the ability to be able to control our own destinies.  You know, if we want to we could team up.  If not, we could stay separate and compete against each other for years to come. "

On if he and LeBron can check their egos:  "Not too many people can do it.  It takes the right individuals to understand that at the end of the day success brings whatever anyone wants, and that's what makes a special team."

On what the odds are that he'll play with Lebron:  "It's a long shot but at the end of the day it's still a shot."

Ok, back to the actual game...

Since losing their first two games of the season the Cavs have gone 5-1, but played their best game of the young season last night when they easily beat Orlando on the road.  Defense will be a big key to victory for the Heat as Cleveland is 4-0 this year when scoring 100 points.  The Heat have given up 100 points just one time this season, it just so happened to be their only loss.

The big defensive assignment of covering LeBron James will likely go to Quentin Richardson, who has proven to be the Heat's best man on man defender this year (other then Udonis of course).   Don't be shocked if you see James covering D-Wade on the other end of the floor, as LeBron has become of the games premier defenders...you just don't hear too much about it because of how sick he is in general.

In a slightly less interesting storyline, this will be the second time that Shaq returns to the AAA as an opponent since playing for the Heat.  He isn't nearly the force that he once was, and the big guy will be lined up against the Heat's new O'Neal, Jermaine.  J-O has been turning up the defensive intensity of late; recording 3 blocks in each of his last two games.  Comparing the two, Jermaine is averaging 13.4 points, 7.6 rebounds and 1.1 blocks while Shaq is bringing in 11.1 points, 7.4 rebounds and 1.7 blocks.

Mario Chalmers is coming off of his best two offensive games this season, scoring 16 and 13 on 65% shooting.  He also dropped in 7-of-10 from beyond the arc in those two games.  Rio will be lined up against Mo Williams, who had been averaging only 12.7 points over his last three games before putting up a season high 28 in Orlando last night.  Williams has been very good from three-point range this season (51%), but so has Super Mario (52%).  The only difference is that Williams has attempted 14 more treys then Chalmers.

Tipoff is at 8pm for the nationally televised game on TNT.