Share All sharing options for: Cavs outlast Heat after Wade and LeBron put on hell of a show 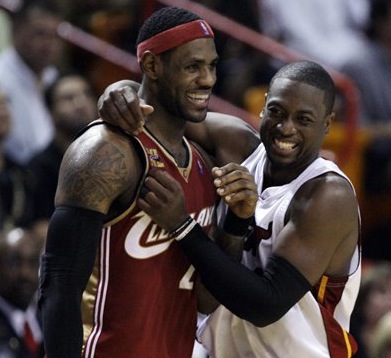 The result may not have been what Heat fans were hoping for, but the first Wade-LeBron match up of the season lived up to the expectations.  The two superstars combined for 70 points, but it was James who got the last laugh.  He shut the door on Miami himself, scoring the Cavs final 8 points over the last 2:42 of the game and keeping the Heat's comeback at bay.

As impressive as his offensive domination was LeBron's defense.  He has such long arms and legs that, when combined with his supreme athleticism, make James one of the top man on men defenders in the NBA.

While on the subject of defense, Udonis Haslem has always been one of the Heat's best defenders but it may not have been such a good idea for Erik Spoelstra to put him on LeBron James.  After Quentin Richardson was called for two early fouls, Spo put U-D on King James and two quick fouls later it was Dorell Wright coming off the bench to defend James.  D-Wright did a good job on LeBron and on offense as well in his limited minutes.

Michael Beasley had a decent game, stretching the floor offensively by drilling a few outside jumpers and driving the ball when he could.  My knock on Beasley is that he hasn't finished well when attacking the rim, often getting himself in a situation where he has two or three defenders around him.  Too many bad looking forced shots from inside the paint for my liking...but we know that Beasley is a work-in-progress.

Forgive the short post...I don't do well when feeling under the weather.  Tomorrow night its Nets @ Heat, a nice way to bounce back after the tough loss to Cleveland.