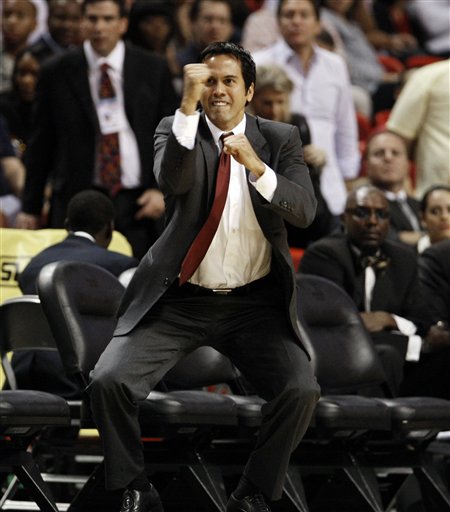 Anybody got a funny caption for this...?

The Heat will conclude their 5-game homestand tonight when the Oklahoma City Thunder rolls into Miami.  So far it's been a very pleasant start to the season at the AAA; a win would move the Heat to 6-2 at home.  Miami is coming off of their worst shooting night of the young season, hitting only 39% of their field goals, and that was in a game that was supposed to be a ‘bounce back' game for the Heat after their rough loss to Cleveland.

After barely getting the ‘W' against the winless Nets, Miami will now face a Thunder team looking for their 3rd straight win on the road.  They are another favorable matchup for the Heat, as OkC scores just 93 points/game while allowing their opponents to score 105.  True to their numbers, the Thunder are coming off of a home loss to the Clippers in which they scored 93 points, 40 of which came from Kevin Durant.

Durant leads a promising but underachieving young core for Oklahoma City.  In just 3 short years he has become one of the more exciting swingmen in the league and will be a handful for Quentin Richardson, who is more then likely going to draw Durant as a defensive assignment.  In 10 games this year he is averaging 28.1 points and 7.4 rebounds while playing in over 40 minutes a game. He's 5th in the NBA in scoring just 1.6 points behind Dwyane Wade who sits in 4th.

Russell Westbrook is another very young and very talented player that the Thunder have the pleasure of developing. Westbrook is on that short list of point guards taken before Mario Chalmers in the 08 Draft, and you know how much Rio loves proving how good he is against the guys chosen instead of him.  Russell had a very successful rookie campaign and is already building on those numbers, but Westbrook still has some work to do with his jumper.  He's shooting just 32% in his last five games, but is a good rebounding PG and still averages 7.4 assists/game, which is ridiculous.

Tipoff from the AAA is 7:30 and I've got a feeling that tonight the giant black curtains will be covering the balcony seats.  Even with a 7-2 start, the Thunder aren't drawing a big crowd on a Tuesday in November (or March for that matter)