Playoff deja vu as Heat get spanked in Atlanta

Share All sharing options for: Playoff deja vu as Heat get spanked in Atlanta 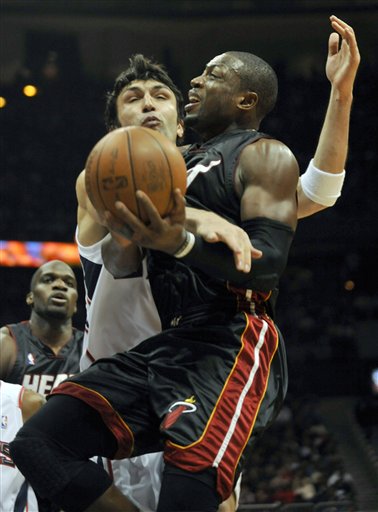 The only thing missing was a Zaza double double

This game was almost an exact replica of what the Heat dealt with in the first round of the playoffs last year.  I'll be shocked when these two teams play a close game that goes down to the wire.  For whatever reason, they either play amazing or like crap against one another.

With Udonis Haslem out, we knew before the game even started that Mike Beasley was going to be relied on much more then usual.  Beasley knew that too and got off to a great start, hitting a jumper in perfect stride to put the Heat up 2-0.  Then on the other end Mike Bibby missed a jumper and while it was J-O coming down with the board, Beasley was jumping right next to Jermaine.

Beasley and Wade got off to completely opposite starts.  While Beasley shot a perfect 5-for-5 to start the game, Wade missed his first 5 shots.  Over nine minutes into the quarter the only players to score for Miami were Quentin Richardson and Beasley.  Q was 2-for-2 with a pair of treys.

D-Wade finally hit a shot with just over 2 minutes left in the quarter, then shortly after he made his first awesome dunk.  The Heat opened the 2nd quarter with a very interesting lineup Arroyo, Cook, James Jones, Shavlik Randolph and Joel Anthony.  My first reaction was thinking the Hawks would almost certainly be expanding their lead, but instead it was a James Jones three that put the Heat up by 3.

Shav Randolph was looking shaky but good; he scored his first points as a member of the Heat, and I'm sure the Heat coaches noticed the charge he drew on Jamal Crawford.  That lineup allowed the Heat to rest Wade, O'Neal and Beasley until half way through the 2nd quarter, and all while turning a 3-point deficit into a tie game.  Then the starters came back in and all hell broke loose.  I'll spare the details but the Hawks went on a 24-4 run that found the Heat down 17 at the half.

The Heat opened the 2nd half scoring the first 5 points and kept rolling along thanks to a couple Mario Chalmers treys and some great D.  The Hawks are certainly a night and day team...at times they look amazing and at times they look terrible.  Miami opened on a 13-2 run and after being down at one point by as many as 19, the Heat were right back into this game.  They drew within 6 of the Hawks five different times but a stupid foul by Carlos Arroyo gave Atlanta 2 free foul shots, putting the Heat down by 7 after 3.

The reserve lineup that started the 3rd quarter so well had a rougher go of it the second time around, with the Hawks expanding their lead to 12 in just two minutes.  Things went from bad to worse when Beasley and J-O both picked up their 5th fouls early in the quarter.  Then an over the back foul committed by Shav Randolph after another Heat miss pushed the Heat over the foul limit, and there was still over 8 minutes left in the game.  Down by 7?  How about 16, thanks to the Heat getting outscored 10-1 to open the 4th quarter.

A perfect example of my problem with Beasley came with 6 minutes left and the Heat down 12.  The ball came around the perimeter right to an open Beasley, who passed up the ‘good look' three to drive.  He lost the ball out of bounds and the Hawks came right back down and hit a three of their own.

Next up is Toronto eh?  Friday night at 7 from the Air Canada Centre Miami will try to get their game together against future Heat forward Chris Bosh and the Raptors.