It's all about the U...donis Haslem. His big night brings Heat to 3-0.

Share All sharing options for: It's all about the U...donis Haslem. His big night brings Heat to 3-0. 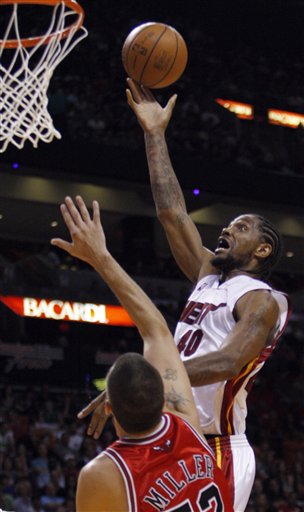 Three games into the season the Heat finally got to play a potential playoff team.  They battled hard throughout and times where past Heat teams would have faltered due to poor defense, this team stepped up and played good, solid D.  It was never more apparent then down the stretch of the game.  After a game full of lead changes, John Salmons put the Bulls up by 1 with a trey with 3:54 left in the game.  That would be the last field goal made by Chicago.

The Heat turned up the D and out-scored the Bulls 13-4 to close out the game, and are now 3-0 for the first time since 2004.  This time it wasn't Jermaine O'Neal taking over the game, as he took only 6 shots, scoring 8.  He did however grab 7 more rebounds, which I think is as important as his scoring, if not more.   Late in the game he took a hit to the face, breaking his nose.  He said after the game that he would play with a face shield; he's done it before.

A couple of important things happened yesterday, one good and one bad.  We'll start with the good: In the 3rd quarter Dwyane Wade scored his 20th point of the game on a free throw.  That would be his 10,000th career point, the first time a Heat player had reached that plateau.

The bad news is that former Heat center Allen Ogg passed away Sunday in Alabama, his home state.  He had checked into the hospital with concerns of swine flu, but an infection was found and it reached his heart, causing his death.  There was a moment of silence held prior to tipoff at the AAA in honor of Ogg.

How about that bench guy, Udonis Haslem?  Now to be fair, not many bench guys play 35 minutes, score 19 points (on 9-of-13 shooting) and grab 11 boards.  However, there are a lot bench guys who come in and play really good defense, so with Udonis, it's the best of both worlds.

Also playing well out of that position is Michael Beasley, who is playing a more ‘well rounded' game this season.  He struggled offensively, making only 3 of his 12 shots, but his rebounding and defense were keeping him on the floor.  31 minutes and a 10-11 double double sounds pretty damn good for an off night.

Dwyane Wade made some ridiculously sick moves in the 1st half, but overall had a rough night under the watch of Kirk Hinrich.

OK, lets talk about defense.  Quentin Richardson, Joel Anthony and Dorell Wright (yup) really impressed me with their D.  We know Richardson can score, and he had two huge treys in the 4th quarter, but the way he is playing D we could have another James Posey on our hands.  Anthony looks a little quicker and more athletic then he has in the past, and he's still a shot-blocking machine.  He had 3 in only 20 minutes.

Dorell Wright was the beneficiary of Daequan Cook taking the night off to rest his sore shoulder.  Wright played well in limited minutes, especially defensively.  He had 2 blocks in 16 minutes.

Carlos Arroyo had by far his best game in a Heat uniform; drilling several big jumpers during the 2nd half of last nights slug fest.  12 points on 5-of-7 shooting and 2 assists were great, but his playing so well seemed to elevate the game of Mario Chalmers too.

James Jones dressed but didn't play last night.  He is recovering from a stomach virus that held him out of Friday's game in Indiana, and it seems he'll have to work his way back into the rotation.  I don't think it will take very long for that to happen.  When he gets back to 100% it will be hard to not have him on the floor.

Next up...the Heat host the Phoenix Suns on Tuesday night at 7:30.