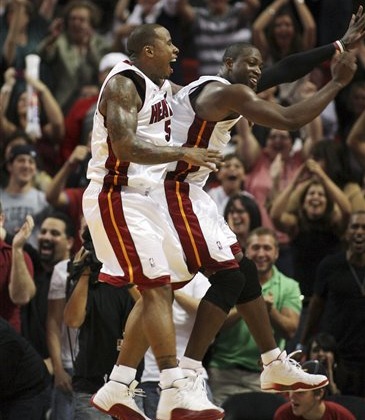 A lot of talk in the past couple days has been about Dwyane Wade's current shooting slump.  Some think that he is just mailing it in until the end of the season, some think he is upset that he is the only playmaker, others say its just playing against a zone D.  I'm just going to stick with ‘normal, everyday slump' that all players inevitably go through, and that Wade will be back to his usual 30-point self in no time.

I realize it's distressing that Wade has shot just 20-of-54 in the last three games, but he isn't the only guy struggling.  Michael Beasley's shooting 14-of-41 in the last three; Daequan Cook just 9-of-27.  I hate to single out a few guys when really the entire team has been slumping.

In the last three games the Heat are shooting just 42% from the field and 31% from beyond the arc.  The team's great D can only carry them so far, but offensively the Heat have been struggling to get guys open when facing a zone, leading to a lot of contested jumpers.  There is not much movement coming from the players without the ball, so it's more difficult to find open players.

Also, the lack of motion keeps the opposing defense from opening up driving lanes, which is why the Heat haven't been able to get to the line as much as usual.  Not that it would make a huge difference right now with the way the Heat are shooting form the foul line.  On the season Miami has been shooting very well from the charity stripe, ranked 10th in the league at 77%.  In their last three games however, the Heat are just shooting 69%, which is the same as Milwaukee and Phoenix, who are ranked last in the NBA.

The Raptors are coming off of a tough loss in Utah, their third in a row, but one positive was they got Hedo Turkoglu back after missing 1 game.  The Raptors have been solid offensively, scoring 100 or more points in all but two games this season.  A lot of the credit goes to their all-star Chris Bosh, who is having an amazing year thus far.  Bosh averages a double double (26.8 and 12.2) but has continued to improve defensively and blocked at least one shot in all but three games.

Look for Jermaine O'Neal to get involved early and often against his former club.  His counterpart, Andrea Bargnani has been struggling lately on both ends of the floor.  In his last three games Bargnani has shot just 36% from the field, and when he isn't shooting well that makes him a much less effective center.  He doesn't have much of an inside game and is more prone to putting up a couple of treys, but should be taken advantage defensively by a healthy and well-rested O'Neal.

Tipoff from the centRE is at 7.  You know what they say....'nothing gets you out of a slump better then a trip to Canada.'