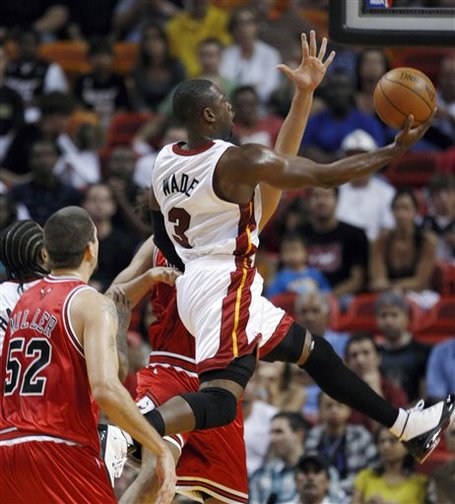 Two days after beating the Bulls, the Heat get to face probably they're hardest of test of the young season when 3-0 Phoenix come to the AAA.  The Suns may not be very deep, but their starters are goooood.  The lowest scoring average among the five starters is 18.3 ppg; compare that to the Heat who have three starters averaging under 15 ppg.

This game will be a great way for us to gauge the Heat's defense.  Phoenix is one of the league most offensive teams, and as we all know it starts with their point guard, Steve Nash.  His game seems much stronger now that he has Jason Richardson with him in the backcourt.  Richardson has been a great addition to the Suns, but perhaps not as good as Channing Frye, who is really blossoming in the fast pace Phoenix offense.

Keep this is mind...the Suns average more points then any other team in the NBA.  They shot over 50% from the field and from beyond the arc, which is sick.  Yes, the Heat are also shooting over 50% on the season, but they have not faced anything like what they'll see from the Suns tonight.

Hopefully the Heat will have Daequan Cook back, as his outside shooting would be a huge help.  He went only 1-of-9 from the field against Indiana on Friday when he tried playing with a sore shoulder, but was given the night off on Sunday against the Bulls.

Grant Hill is age-less, and playing great.  Just letting you know so you aren't surprised.

Amare Stoudemire is coming off his first multi-block game of the year, and is supposedly much better defensively this year then in years past.  We'll see, as he has to go against the Heat's amazing power forward tandem of Beasley and Haslem. Take a close look, Heat fans...Amare is likely to be targeted by the Heat in the offseason to be our next center.

Perhaps the Suns best bench player, Leandro Barbosa, could be limited with an inflamed wrist.  He is expected to play, but if his injury is bothering him then it could be a rough night (like Daequan's last game)