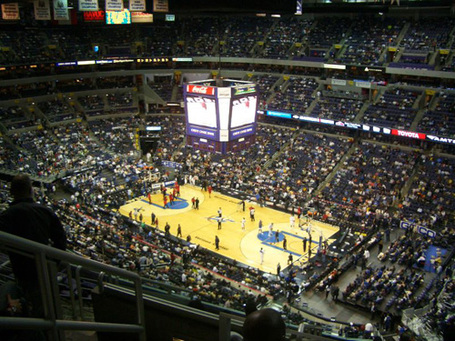 Tonight is a game I have been looking forward to for a while.  The Wizards have some very talented players on their roster and with the Heat playing so well, this could be a hell of a season series.  Make no mistake, the Southeast Division is much improved this year and will be much more competitive.

The biggest difference in the Wiz from last year to this year is that Gilbert Arenas is back.  He was/is one of the best point guards in the league but is still working his way back into his ‘normal' game shape.  The main knock on his in the early season has been his D, but with the way Mario Chalmers has played the last couple games, who knows how Arenas will look tonight.  He is tied for seventh in the NBA in scoring thus far in the season, averaging 26.5 points/game.  Who is he tied with...?  Why none other then our own Dwyane Wade. The difference between the two; Arenas is shooting 50% from beyond the arc and Wade is shooting only 14%.

The Heat's power forward tandem will face a solid defender in Fabricio Oberto, whose athletic ability on D almost makes up for a poor jumper and very erratic offensive contributions.  This is certainly a mis-match in favor of the Heat, hopefully making up for the huge mis-match at PG.  The Wizards normal starting power forward, Antawn Jamison, will be out at least another week with a shoulder injury.

Washington will throw a couple of good defending centers at the Heat tonight.  Brendan Haywood and Andray Blatche are very hot/cold when it comes to offense, but you can bet they will make you work on D and block a couple shots while doing it.   After the block party the Suns threw last night in the Heat's house, you better believe that Miami will be making a better effort in getting their shots off (meaning more open looks).