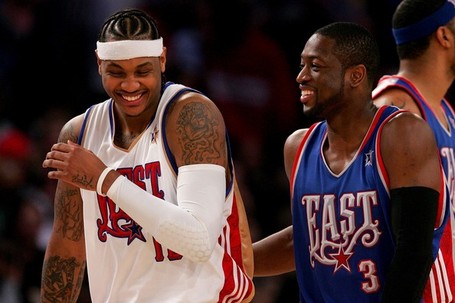 The Heat will look for their first victory against the Nuggets since 2004 when Carmelo Anthony and co. come to Miami tonight.  Denver has won eight straight games against the Heat, four at home and four on the road.  Both teams have gotten their seasons off to great starts as Denver comes in at 5-0 and Miami is 4-1.

The Heat will probably need another big night by Dwyane Wade to keep pace with Carmelo Anthony, who has gotten off to perhaps the best start among all NBA players.  He's averaging 32 points/game while shooting 46% from the field as well as from 3-point range.

Chauncey Billups is another guy who worries me, not only because of how good a player he is but also how inconsistent Mario Chalmers has been defensively.  At times he has been able to hold his own, but overall I'd say that he still gets beat too easily off the dribble and gets caught down low too often.

What may be a slight advantage for Rio is that Billups sprained his left ankle in Indiana on Tuesday and still may be bothered by it.   He played on Wednesday night in New Jersey but was relatively ineffective compared to the rest of his games, so we'll see how much he has healed this week.

Another guy to watch out for on Denver is rookie guard Ty Lawson.  He is coming off his best game in the NBA (23 points on 9-of-10 shooting), and can be a real spark off the bench.  We'll see how Erik Spoelstra handles his defensive matchups tonight, but I wouldn't be shocked to see Dorell Wright getting upwards of 15 minutes due to his defensive ability.

For a Nugget-view preview, head over to Denver Stiffs and check out their head-to-head position matchups.  Good stuff!