Share All sharing options for: Great team effort by Heat hands Denver their first loss of the season 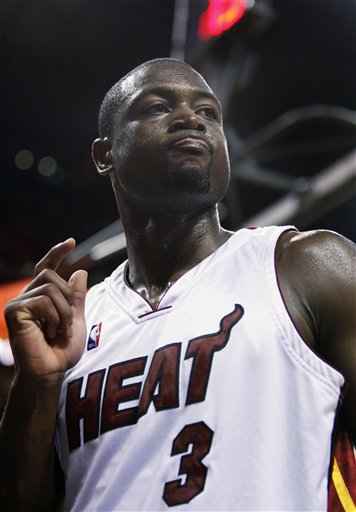 It seems that this Heat team cares nothing for the past.  Losing streak in Indiana?  Nah...not an issue.  Eight straight losses to the Nuggets? We'll hold them to 27 points below their season average.  While Denver was the team getting the big game from their superstar (30 points 8 boards for Melo, 22 points 5 assists for Wade), Miami played some of their best basketball of the season, outscoring the Nuggets 55-35 in the 2nd and 3rd quarters.

One of the reasons Denver had such a hard time scoring was due to the Heat defenders away from the ball moving very well.  The Nuggets are at their best when moving the ball and getting guys open, but tonight the Heat kept Denver off balance and taking shots they didn't like.  Any time that the Nuggets are held to 10 assists its highly likely they wont be winning that night.

I'm not going to ignore the comeback attempt by Denver, but it was nice to see the starters clamping down before it got too scary.  The overall defensive effort was impressive, but it's been a pretty constant thing over the first six games of the season.  The Heat hold opponents to the 2nd lowest shooting percentage (tied with Boston at 40.7%), and only six teams give up less points/game then the 91.2 that Miami surrenders.

Overall, it appears that we could have something brewing down here in Miami.  FACT: Miami has an offense packed with guys who can shoot and score with the best in the league.  FACT: They are playing defense above and beyond anyone's expectations (other then maybe Coach Spoelstra).

You could make the argument that they have only played 3 teams with records above .500, but if the Heat can go 2-1 in those games and then a perfect 3-0 against the teams under .500, I'd say that's exactly what any team would want.

The Heat now get 3 days off before the Washington Wizards come to town on Tuesday night.  Between now and then, the Wiz get to host the Phoenix Suns on Sunday afternoon.