The Heat and Da Bulls come into this contest two teams moving in opposite directions.  The Bulls have won 5 of their last 7.  The Heat have lost 5 of their last 7.  Miami was within a half game of 4th place in the East a couple weeks ago, and now are tied for 5/6/7, 3.5 games back of the 4th place Hawks.  The Bulls have clawed their way back into playoff contention, 1.5 games behind the 8th place Bucks. 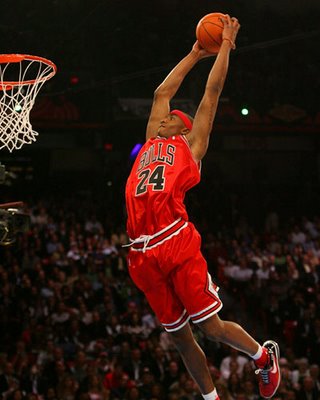 Tyrus Thomas has been playing amazingly better since mid-December, seemingly out of nowhere.  He started the season the same way many of the Bulls did, very slowly.  Now Thomas has had double-double’s in 6 of his last 7 games, and has been mentioned in trade talks with the Phoenix Suns, with the Bulls looking to acquire Amare Stoudemire.  Anybody think the Bulls will offer up Derrick Rose?  Of course not, but it sounds much more psychotic then the idea of trading Beasley did a few days ago…
Anyhoo, keep an eye on Thomas because ‘big guys’ have a tendency of torching the Heat, whether it be by scoring or on the glass or both.

The Bulls have been using their backcourt to close out games, most noticeably in their last game when Derrick Rose and Ben Gordon scored 17 of the Bulls last 21 points.

Rose tends to stay to the outside despite being encouraged to drive more.  The Bulls would like to see Rose get to the free throw line more, but Derrick has been more comfortable putting up J’s.

Don’t get too down on the Heat…remember they went 15-67 last year, and coming into this season were looking at the .500 mark as an obtainable goal, along with a playoff seed. 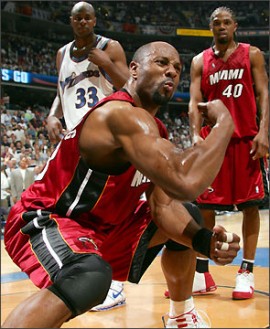 Real simple…hard work and a 48-minute effort.  The Heat are not a happy bunch, and that goes all the way to the coach, who isn’t making any excuses for his team.  Instead, he held a two and a half hour practice when they were only scheduled for an hour, and threw in a film session that I imagine included a lot of defensive breakdowns.  The Heat will get their longest break since starting the season so they shouldn’t worry about being tired and holding anything back.  If they don’t come out with a supreme effort tonight…then we may have something to worry about.

"We need to get back to it," Spoelstra said. "We have one game before the break and plenty of time to rest after that."

Last night it was a great night for Sixers fans.  They beat Memphis at home, and with the Pistons losing to Atlanta, moved into a 3-way tie with Detroit and Miami.  Milwaukee won at home and stayed a game ahead of 9th place New Jersey.