Heat Say Ole' To Bulls, Go Into Break All Alone In 5th

Share All sharing options for: Heat Say Ole' To Bulls, Go Into Break All Alone In 5th 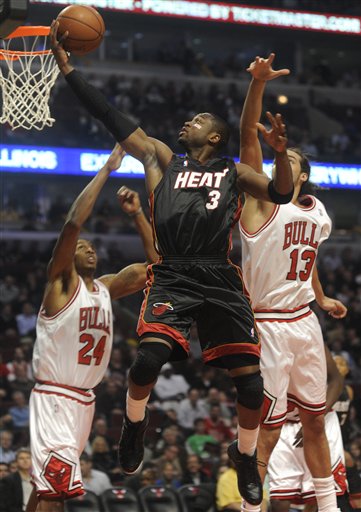 It may not have gone down the way the Heat would’ve preferred, but endings like those make blown leads worth it.  After coming out a little flat, the Heat did what they usually do, controlling the game while slowly building a lead but then faltering with sub’s in towards the end of the game.

And then there is D-Wade, who went from being the goat to the hero in the final seconds on a crazy couple of inbound plays.  He first had trouble controlling the inbound pass with 4.7 seconds left and the game tied, which led to a Bulls steal and ball possession with 3.5 ticks left.  Then on the ensuing inbound pass by Chicago, the Heat played great ball denying D which allowed Wade to steal the inbound pass, keep 1 foot in bounds and call timeout while falling out, all in one motion.   It was an AMAZING play that will likely not get the national attention and appreciation it deserves.  But hey, as long as we here at The Penn appreciate it…then it’s all good.

For the most part, the Heat played great D through the 2nd and 3rd quarters and for spurts in the 4th.  Miami forced 15 steals and blocked 8 shots, which were stretched out.  4 different Heat players had 2 blocks apiece; Super Mario had 4 steals with Marion and Haslem each stealing 3.  Miami also did a good job on the defensive glass grabbing 27 on that side while only allowing the Bulls 8 offensive rebounds.  It is now a well-known fact that the Heat feed off of their defense, and I would imagine they will spend a lot of time working on that side of the floor during the All-Star break. 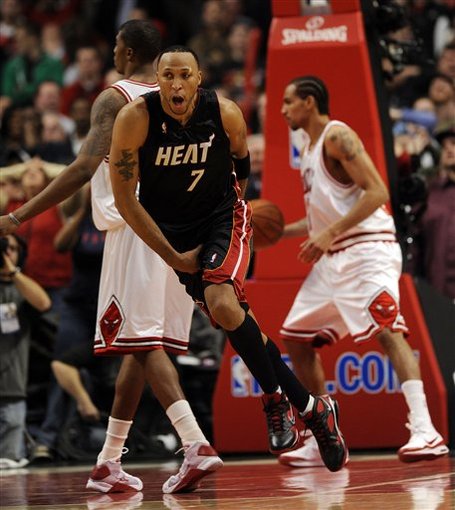 Will this be our last Image of Shawn Marion in a Heat uniform?  Just so we are clear, this is him moments after scoring his GW dunk.  "1..2..annnd 3 we're good"

During a timeout with 3 minutes left, Udonis went off on his teammates, demanding that his teammates step up and start making plays.  He even broke Coach Spoelstra’s clipboard in half during the tirade.

The Heat went with a small lineup for most of the game, playing Haslem at center against the smaller Bulls.  Jamaal Magloire didn’t play at all for the first time since December 1st, a 33 game stretch, and Joel Anthony only played 10 minutes despite starting the game.  This led to Wade, Chalmers, Beasley, Haslem, Marion and Cook all playing over 30 minutes.

When the Heat were struggling in the opening quarter, I noticed them passing the ball way too much, often passing up open looks and eventually leading to a bad look and an expiring shot clock.

D-Wade was again forcing up some ‘not so pretty’ jumpers late in the 4th, but would settle in and hit several late buckets which appeared to be enough to give the Heat the "w", but it would take a ridiculous steal and a great pass to close the deal.

Michael Beasley seemed to break out of his ‘mini-slump’ with a very solid night all around.  He shot 9-for-10 from the field for 21 points and added 7 boards.  He also had some good defensive moments, but the best thing to see was how much better he is getting driving the ball to the hoop, looking confident and comfortable while drawing fouls.

The Heat pulled out the victory despite being out-scored by 12 over the last 13:19 of the game.

Miami used a couple nice and quick runs in the 1st half to put themselves ahead.  In the first quarter they scored 8 points in 77 seconds to go from 9 down to 1.  Then in the 2nd, they scored 7 straight in a 1:28 span to go from being down by 1 to up by 6.

Joel Anthony was the only starter not to turn the ball over during the 1st quarter.

The Heat (Chalmers) shut down Derrick Rose in the 4th quarter in the 5 minutes he played, scoring only 4 of his 18 points in the stanza.  It was interesting that the Bulls had Rose on the bench for many of the ‘bigger minutes’ of the game.

Despite being outscored on the free throw line 30 to 12, the Heat still shot 92.3% from the line, and they needed every point!

The Heat’s big victory put them ahead of idle Detroit and Philly, all alone in 5th place. 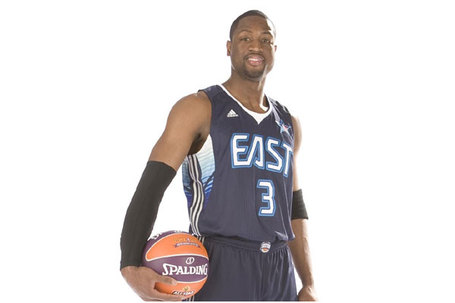