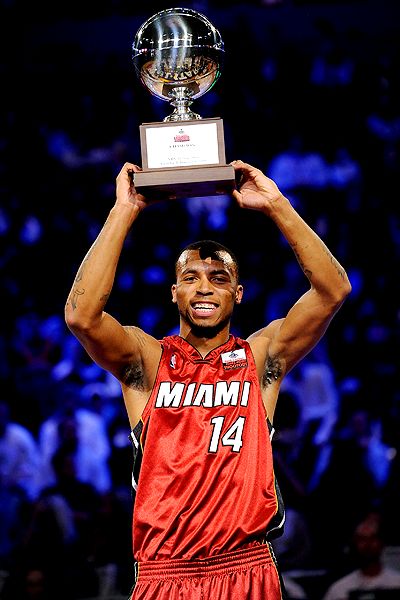 On a day ruled by the slam-dunk competition, Daequan Cook left his mark.  During his first round of shooting, a round that he scored more than anyone, TNT’s Kenny Smith announced that Cook winning the 3-point Shootout would be the biggest upset out of all the contestants.  He hit 4 of 5 money balls in that 1st round, and his score of 18 beat Rashard Lewis by 1 and defending champ Jason Kapono by 2.

Cook needed to hit his last 4 shots of the Finals to draw even with Rashard Lewis at 15 and force ‘overtime’.  It was there that Lewis had a horrible round; scoring only 7 points and leaving the door wide open for Dae-Dae to take the crown.  With the money ball on the 2nd rack, Cook clinched the win but would keep firing, sinking 7 of the next 8.

While Daequan was on the court making a name for himself while representing the Heat in his Valentines Red jersey, D-Wade was sitting courtside and smiling like a proud father.  Cook even spoke about Wade in his post-game interview, saying that he and Wade had been talking all week about ‘taking over’ things this weekend.  I wonder if that means D-Wade is planning on attempting a hostile takeover of some kind tomorrow night?