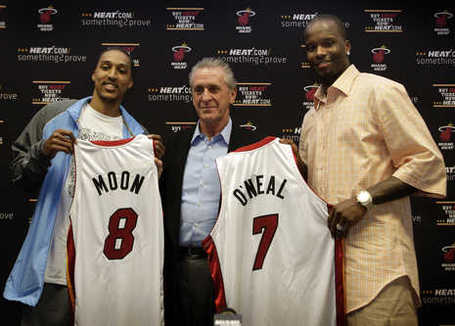 Welcome to the party, boys...

It was already a rough season in Minnesota when Big Al Jefferson went down for the season, and now the Timberwolves are a team struggling to find an identity without their leader. The Heat appear to be moving in the opposite direction. After trading for Jermaine O'Neal they have filled a giant void and will not be overmatched against many of the better teams in the East.

Well who else...? Tonight is the night we have been waiting for: Jermaine O'Neal's first game with the Miami Heat. There is nobody else I'll be keeping my eye on more then Mr. O'Neal, who I'm hoping will fit right into our 1 spot and give us the productivity we have been craving from that position. For now I think 8 is the magic number for O'Neal; 8 points, 8 rebounds...anything in that area is good. Said O'Neal about joining the Heat:

''It's almost a perfect fit, as far as the style of play and the things they like to do,'' O'Neal said at Tuesday's introductory news conference after his first Heat practice. ``We have a really good chance to do something special.''

The Wolves are coming off a tough loss in D.C. last night. They took a 1-point lead with 1:08 left in the game, but wouldn't score again, losing by 8.

Daequan Cook and Michael Beasley both had very productive All-Star Weekend's. Hopefully they will come back with a boosted confidence that will show on the court.

I also think that with Jermaine O'Neal manning the paint for Miami, there will be a little less pressure on Beasley to play ‘big minutes'. Look for Beasley to flourish and maybe hit another offensive gear with the help of a true center to keep the pressure off Beas.

I'm looking forward to seeing how Coach Spo works the rotation with our new players. Both are in game shape and should be able to handle extended minutes. O'Neal should be playing 30+ minutes.

Don't worry about the ‘feud' between Jermaine O'Neal and Udonis Haslem. The days of disliking eachother are long over, and the players had this to say on the subject.

"Those years are gone," Haslem said after Tuesday's practice. "It was in a different place in my career on a different team. And like I said, we're on the same team now so we'll fight for each other against somebody else."

O'Neal said Haslem is "one of those players you hate to play against and love to play with." He later added, "I really feel he doesn't get the credit he deserves."

Tonight everything went to the Heat's way, as the post-All-Star break stretch has gotten off to a positive start. The Lakers helped everyone out by beating Atlanta in Cali, and the Pistons lost at home to the Bucks, who despite losing player after player to injury, continue to find ways to win. The Sixers also lost, falling to the Pacers in Indiana; the Nets lost in Houston and the Knicks beat the Spurs at home.