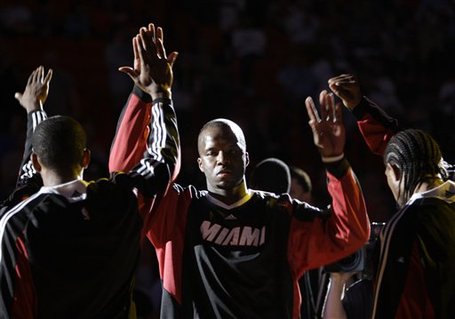 After such a great start it was puzzling to say the least, watching the Heat squander an early lead and fall to the Timberwolves in the debut of Jermaine O'Neal and Jamario Moon.  Moon would only play 5 minutes, but O'Neal started and provided instant offensive production.  What troubled me was his lack of rebounding...but he was often drawn out of the paint on defense, and the Heat did nothing on the offensive glass. 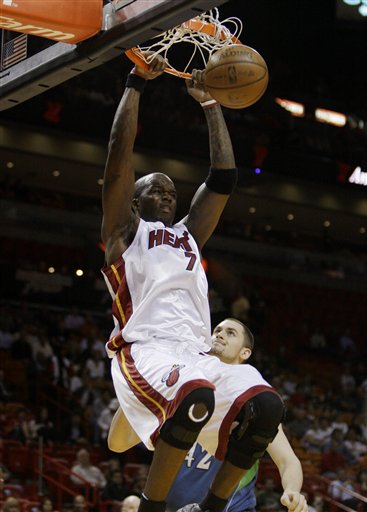 Get Used To This Image...

O'Neal played a great 1st half, going 4-for-5 from the field and 4-for-4 from the foul line.  His 2 assists let to buckets by Udonis Haslem, and Haslem's only assist was on an O'Neal jumper.  The two looked great on the court together, and Udonis had more open space tonight then he had possibly all season.

Coach Spoelstra needs to stop putting Chris Quinn out there during ‘crunch' time when there is an emphasis on defensive stoppage.  After going on a 12-0 run in the beginning of the 4th quarter, Mario Chalmers committed his 5th personal foul and came out of the game for Quinn.  The Heat were outscored by 4 in the 3:38 Chalmers was out, but more importantly the Wolves hit back to back 3 pointers in which Quinn was slowed up trying to rotate.
What is also troubling is that the Heat called timeout after the first 3 was made, but came out of the timeout with Chalmers still on the bench and Quinn still on the court.  Minnesota would quickly hit another 3, which prompted Coach Spo to get Chalmers back in there.
Unfortunately the 6-point swing came with the game tied.  I would prefer the Heat to have Wade and Cook out together in the backcourt then Quinn during times where the Heat need defensive stops.  He is really becoming a defensive liability, and that more then anything else may prompt the Heat to make a move before the trade deadline passes later today.

I was not happy with the idea of starting James Jones and I think the Heat need to figure out where they stand with the ‘shooter'.  I can live with the fact that he made need more time to rehab his wrist, but stop putting him on the court when our minutes are so valuable.  In case you were wondering, our starting SF went 0-for-4 from the field in 17 minutes, grabbing 2 boards and committing 2 fouls.

I'm also very concerned with the lack of effort from the Heat on the glass.  They were out-rebounded 49-24.  That's 25 more rebounds that Minnesota grabbed.  That's scary, especially considering that Al Jefferson was nowhere to be found.

With the loss, the Heat fall to 4-14 when giving up 100 points to their opponent.

Udonis Haslem had a great first half with Jermaine O'Neal by his side; he had 4 1st half dunks and went 6-for-9 for 13 points and 6 boards.

Daequan and Beasley both struggled off the bench.  Beas only played 18 minutes but still managed to put up 10 field goal attempts, but only made 4.  His 8 points matched Daequan's point total.  Dae-Dae hit his first three-pointer but then missed his next 6 shots.

The Hawks won in Sacramento last night to move 3.5 games ahead of Miami for the 4 seed.  Philly lost their second straight, falling at home to Denver, and the Bucks lost at home to Chicago, who moved to 1.5 games behind Milwaukee for 8th place.  The Nets lost in Dallas and fell a half game behind the Bulls. 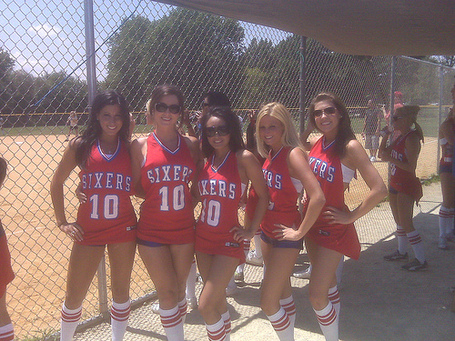 After 2 straight losses, the Sixers dancers are ready to bail for the Phillies

The Sixers went into the All-Star break winners of 4 in a row and 6 of 7, but have come out with 2 straight losses.  It's a big game in the standings, because a win would put Miami 2 games ahead of Philly, but a loss would draw the teams into a tie.  It's a Saturday matinee, 3:30 tip-off at the AAA.