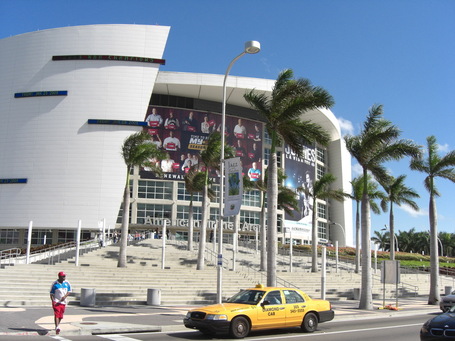 With just under 30 games left in the regular season, this game is big to a couple teams desperate to make a move in the standings. Both the Heat and Sixers have their eye on 4th place and home-court advantage in the 1st round of the playoffs. A Heat win will put them 2 games up on Philly, but a loss means that the Heat and Sixers move into a tie for 5th. Both teams are going through recent struggles, with the Heat getting owned on the glass and the Sixers shooting very poorly during their 2 game losing streak.

Samuel Dalembert has not been the happiest guy lately, and finding out that the Sixers were trying to deal the big man doesn't help. He still has two years and $25 million left on his contract, and Philly couldn't find anybody willing to take on his salary.

Still, Sammy has been on fire in the month of February, putting up numbers well above his season average in points (9.4), rebounds (10.5), assists (0.7) and blocks (2.0). He also has been getting over a third of his boards on the offensive side, so the Heat will need to be extra aware when grabbing rebounds. But after the effort they displayed against Minnesota on Wednesday, I would think they'd be all over the glass tonight.

Andre Miller suffered a strained right calf in the 3rd quarter of Philly's loss to Denver on Wednesday and is listed as day-to-day, but should he miss tonight's game it will end the veterans consecutive games streak at 501, the longest streak in the NBA among active players.

Michael Beasley has been working hard on the defensive side, but results have varied. Tonight may be one of those nights where B-Easy is all over the paint, sniffing out a double double.

After fouling out in only 24 minutes against Minnesota, Mario Chalmers will need to do a better job of staying on the court and staying out of foul trouble. Said the coach:

''It's a fine line,'' Spoelstra said. ``I want him to be aggressive. I want him to put pressure on the ball. I want him to disrupt. But, at the same time, he's got to do all of that with incredible technique and focus. If he's late on anything, those can quickly turn into fouling situations.''

Should the same situation arise again, I would rather see the backcourt of Wade and Cook then to have Quinny out there. He is just too much of a defensive liability.

As far as the injured Heat players go, I would think that D-Wade and new O'Neal (we've gotta come up with a nickname for this guy) will play, but I'm not so sure about James Jones. Hearing him say that he thinks his wrist injury has been re-aggravated is not a good sign, considering how long it took him to come back, and how long its taking him to get back to form.

Big thanks to Portland for putting a solid beating on the Hawks. The Heat are now 3 games back of 4th place. Lebron had 55 and the Cavs beat Milwaukee, and the suddenly hot Bulls beat Denver, and are now only a half game behind the 8th place Bucks.