Today was a chill day in Heat-land, with the team having a ‘light’ practice that included everyone, even the injured James Jones. Coach Spo said that Jones could’ve played on Tuesday night, but during the game decided that the rotation the Heat were using (only 3 bench players getting major minutes) was good enough for the Pistons.

Jones looked good in practice today, wearing a protective glove on his right hand. "He shot the lights out," coach Erik Spoelstra said. This isn't the first time I've heard about Jones shooting great in practice, so don't get too excited. But hey...It's still nice to hear some positivity about Jones.

At the end of practice the Heat went through some very high octane scrimmaging, but Dwayne Wade, Udonis Haslem and Jermaine O’Neal were allowed to sit out "for good behavior".

Speaking of O’Neal, it was brought to my attention today how well Dwayne Wade has been doing since Jermaine joined the Heat. D-Wade is averaging 35.7 points on 55.8% shooting in the 4 games since O’Neal joined the team, and he has dished out 10.5 assists too. That’s right boys and girls, a double double average.

Do we really have to talk about D-Wade’s ‘band-aid’? It’s gotten to the point where its obvious that Wade doesn’t need to wear it anymore, but either he thinks its lucky considering how well he has been playing since donning the new addition to his uniform or that the opportunity to make a fashion statement has gotten the better of our superstar.

"I need it but I don't need it, you understand what I'm saying?" Wade said smiling, after Wednesday's practice. "When the game comes, on my face is still sensitive here," he said, pointing to small scar where the stitches were, "so I need it."

In case you were wondering, he doesn’t wear it during practice. 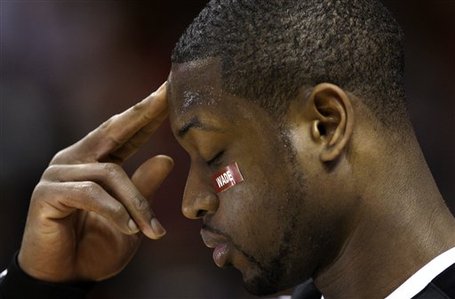