It seems like forever since the last Heat game…but its really only been a few days. Don’t’ worry Heat fans, after this weekends back-to-back with the Hawks and Knicks, the Heat will play at least every other day until Wednesday March 11th. For those of you wondering, that’s 8 games in the next 13 days…including 2 against Cleveland and games against Atlanta, Boston and Phoenix.

Shifting our attention back to the Hawks, they are coming off of a very tough 6 game road trip in which they won 2 of the first 3 games before dropping the final 3. More importantly, they have allowed the Heat to close the gap between the two teams to only 1.5 games. It’s an interesting situation for Miami, considering that they have been in the opposite position (against Philly and Detroit) recently, trying to keep the distance between them and the teams behind them in the standings. This time the Heat are trying to close the gap, but the most important thing is to keep winning. Plain. Simple. Now go out and do it! 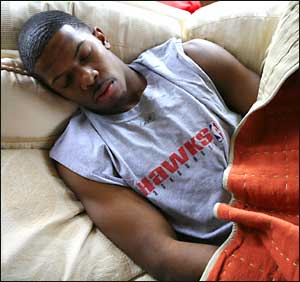 Joe Johnson has always been an intriguing player for me to watch. He can look so good at times and yet occasionally look very mediocre. He is as streaky as a shooter can get, and you can see that by looking at his last few games. He’s shooting 53.3% in his last 2 games, 34.4% in the previous 3, and then 59.3% in the 2 before that.

Some games he just seems to come out looking to have a big night, and some nights its more ‘ho-hum’ for Joe. In my opinion he is having an off year, but being that he can be such a threat from the outside, and considering the Heat’s recent struggles against outside shooting, he is someone to keep tabs on tonight.

Dwayne Wade has led the Heat in points 12 straight games and a ridiculous 30 of their last 32. He’s also let the team in assists in 5 straight and 8 of 10. It’s great to see D-Wade dominating, but I would rather see some variety on the leader board. Let him dominate the NBA…but we need somebody other then Dwayne to step up on our roster.

Mike Bibby (flu) and Josh Smith (personal reasons) missed the Hawks final game on their road tip, a 1-point loss in Denver. They are both listed as questionable for tonight’s game.

Atlanta is looking at a huge weekend. They know just as well as we do what is going on in the standings, and they have a weekend filled with D-Wade and Lebron James to deal with.

I thought Michael Beasley looked great against Detroit on Tuesday, although his stat line may not show it. He was working his butt off on defense and going hard after rebounds. His offensive game is great, and will continue to develop naturally as he works with NBA players on a daily basis. If he keeps putting an emphasis on his defense and working as hard as he did on Tuesday, the sky is the limit for the rookie. I only hope somebody influential is in the rookie's ear telling him the same thing.

It’s going to be a big weekend, not only for Miami but all the teams fighting for their playoff lives. Only Eastern Conference team in action last night was Cleveland, who lost by 19 in Houston.

The Pistons are in a freefall; their losing streak has now reached 8. The race for 8th place is going to be interesting, especially if the Pistons don't get their act together. Chicago and New Jersey are both a game behind the 8th place Bucks, and the Knicks have fallen to 2.5 games back of a playoff spot.