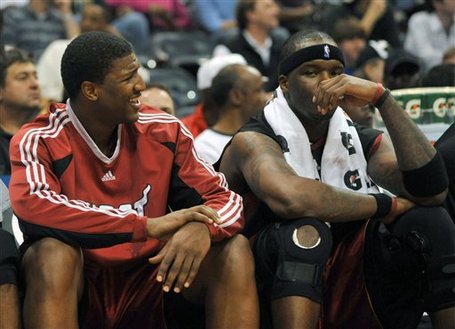 Another game that was seemingly in our grasp but ultimately would slip through our fingers. It seemed like we got a little less then ‘just enough to win’ from many of our players. While the NBA took Wade’s band-aid away, Coach Spo decided to give the headband to Jermaine O’Neal, and he seemed to respond well (defensively).

Coach Erik Spoelstra said, "Anybody could wear a headband if you just had the guts to ask. Jermaine asked and we’re progressive."

His offense was…how can I put this nicely…lacking? Considering that a center will generally take almost all of their shots from relatively close to the basket, how can you justify going 3-for-10? I love the rebounding effort, especially the 6 boards in the 1st quarter. I’ll give him another week or so, and keep chalking up the inconsistency to being part of a new team and new system.

After weeks of clamoring for a trade to be made assuming that a center was the missing piece to our puzzle…we now have a gaping hole at the small forward position. Despite playing ‘out of his style’ offensively, Shawn Marion still sustained the position and played defense that seems even more amazing now that he’s gone. Our perimeter D has taken the biggest hit…and it’s a problem that I feel only James Jones can solve, but that’s a whole ‘nother story at this point.

Beasley looked pretty good tonight, shooting a high percentage (10-for-16) and worked hard on both ends of the court. Eventually he’ll figure out how to combine the great offensive games with the great rebounding efforts and then we’ll see how high this kid can reach.

Once again D-Wade played the role of backup PG several times tonight, with Chris Quinn getting 3 minutes in the 3rd quarter. I’m starting to feel like the Heat, who have now lost 8 of 13, are reaching for things that are just not there.

Looking ahead now to the Knicks game tomorrow night… 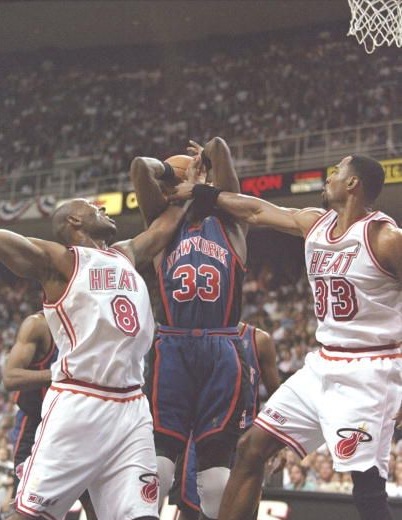 Al Harrington is carrying the load for the Knicks in a big way. He’s scored 20 or more in 9 of his last 12 games, averaging 7.4 boards in that span. Not to shabby, especially considering how versatile the big guys is. He’ll shoot several three’s a game, depending on his mood (he has put up double-digit 3 attempts several times this year). He is by far the biggest weapon on the Knicks…and I'm sure some of you are worried about Nate Robinson, but while he is flashy, he’s still just a backup PG putting up decent numbers.

The Knicks are not afraid to shoot three pointers. Especially if they are coming from behind, the Heat better be ready to guard the perimeter and go after long rebounds. With both teams playing on the back end of a back-to-back, the Heat should control the pace.

As expected, Joel Anthony is the backup center, but he is only good for defense. No offense, no rebounds…just defense. When you need a block, call Joel.

The Knicks should be tired. They had to battle back from a 29-11 1st quarter deficit last night against Philly, but couldn’t get closer then 3. It was a long, tolling game…and with the travel to Miami combined with the fatigue and frustration, the Knicks are ‘ripe for the picking’

It was a night where the Heat would badly need a victory. Other then the Hawks…the Sixers and Pistons won as well, so everybody picked up ground on Miami. Well, not everyone, just the teams closest to the Heat; the Bucks lost in New Orleans and the Bulls lost in Washington, meaning the race for 8th is getting tighter.