Share All sharing options for: Heat Fall Short In Detroit 93-90 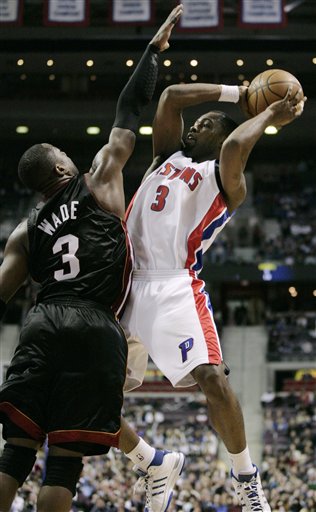 After getting off to a great start, the Heat couldn’t get any kind of offensive flow going, and in the end couldn’t complete a 4th quarter road comeback in Detroit.  D-Wade did everything he could to bring the Heat a win, but he missed 2 shots in the last minute that would’ve tied the game.  He still had a good game with 29 points, 7 boards, 13 assists, 3 steals and 2 blocks, but made only 10 of his 31 field goal attempts.

The Heat lost this game on offense.  By that, I mean that their great D in the 4th quarter put them in a position to win the game, but couldn’t execute on offense to the point of turning the ball over and costing them valuable points.  On back-to-back possessions in the final minutes, Udonis Haslem and Michael Beasley both lost the ball on the way to the rim, with seemingly easy looks at the basket.  We can also mention that the Heat shot 38% from the field and were out rebounded by 10.

Michael Beasley started the game 0-for-8 from the field but finished the game strong.  He scored 6 straight points in the 4th quarter that tied the game at 76.  He finished with 16 points but only 2 rebounds.

Dwayne Wade again opened the game by taking a jumper from just to the left of the free-throw line.

Wade is also slowly but surely getting better at shooting 3’s.  His 4 three pointers in the 2nd half tied a career high.

The Heat started the 4th quarter with perhaps their most deadly offensive lineup: Wade, Haslem, Marion, Chalmers and Beasley.

Jamaal Magloire grabbed 4 rebounds in his first 7 minutes, but would be banished to the bench for Joel Anthony with 3 min left in the 1st quarter.  He would return with 2:31 left in the 2nd quarter and quickly turn a Shawn Marion miss into a putback dunk.

Mario Chalmers hit his 68th and 69th three pointer’s of the season tonight, passing Khalid Reeves for 2nd on the all-time three-pointers by a Heat rookie list.  Chalmers should have no problem becoming the all-time leader, as he is just 10 three’s behind the mark of 79 set by Daequan Cook last season.

On a night where there was an emphasis on getting production from its reserve players, the Heat bench had zero points in the 1st half.

Tonight ended the Detroit Pistons consecutive home sellout streak at 259 games.  This was one of those deceiving records, as their ticket sales far outreach the number of filled seats.  I have been to a few games in Auburn Hills over the past two seasons and each time the arena has been way less then full.  I’d say in this case, the glass is half empty.

For obvious reasons losing to the Pistons hurts more then a little in the standings.  Combined with the Hawks winning in Minnesota tonight, the Heat now are 2 games behind Atlanta and a half game behind Detroit.  The Nets won their 3rd straight in Washington to move into a mathematical tie with Milwaukee for the 8 seed. 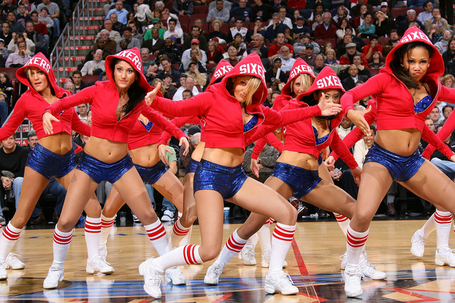 "Welcome to OUR hood"

The Heat will enjoy a couple days off before playing Saturday in Philly. The Sixers are in the midst of a 7-game home stand that they’ve started 1-2, and will host Indiana tonight.