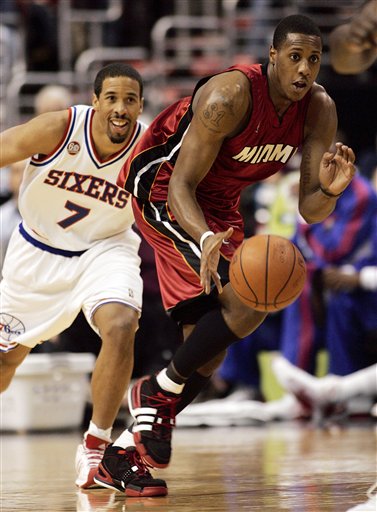 What's with the smile Andre?

The Heat dropped their 5th straight in Philly on a night where they appeared to have the game in their grasp for over 2 quarters.  Miami got off to a slow start but slowly and surely came back and took the lead, keeping it for most of the 2nd and 3rd quarters.  Then things feel apart in the 4th, when the Sixers suddenly couldn’t miss and the Heat couldn’t get anything going on offense.

Remember how I said the Sixers had no bench, and as long as our bench outplayed theirs we would be fine?  Well, Philly’s bench dominated the 4th quarter, scoring 28 of Philly’s 31 points, and outscoring our bench 41-21 for the game.  The Heat also put Philly in the bonus 4:29 into the 4th, which led to the Sixers going 12-for-14 from the foul line in the quarter.  The Heat meanwhile, went 1-of-5 on free throws in the 4th.  The one…was D-Wade’s only 4th quarter point.

Looking at the past week…does anybody have a problem with trading Shawn Marion anymore?

Miami needed more of Jamaal Magloire in the 4th quarter; Philly had way to many 2nd chance opportunities.  We need a center that we can use whenever…can we please make a trade already??

The Heat dropped to 18-4 when leading after 3 quarters.

James Jones followed up hitting his 1st and only 3 of the game with 2 air-ball 3-point attempts.  He played 16 minutes, scoring only the 3 points while grabbing 4 rebounds and a steal.

Michael Beasley was so-so, playing 27 minutes and having a good shooting game, going 7-of-12 for 14 points.  But only 1 rebound and a poor effort on D stand out to me more.  As long as he is still giving non-consistent efforts I’ll understand why he comes off the bench and gets limited minutes.  Remember, this team wins because of its D.

Chalmers had a solid game but I’d like to see him hit some big 4th quarter shots.  Still, 18 points 7 assists and a couple steals will always be nice coming from the rookie.

The Heat used 2-3 zone defense wonderfully in the 3rd quarter, but failed to use it after the Heat got into foul trouble early in the 4th.

Joel Anthony played 6 minutes and had 5 fouls.  He managed 2 points and 2 boards as well. 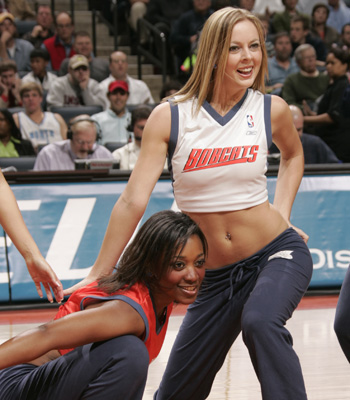 The Bobcats are a decent home team that will be playing without a couple of their best players tonight; Gerald Wallace and Raja Bell will both be out of the lineup for Charlotte.  They have lost 4 straight games and 5 of 6, but that one win came in Los Angeles against the Lakers in OT. 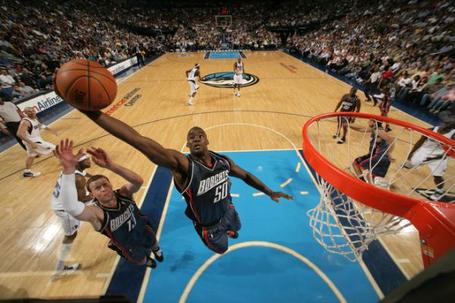 Emeka Okafor is the Bobcats workhorse, and after the Heat did a decent job on Samuel Dalembert last night, a repeat performance will be in order.  Okafor is a great shooter, and has shot above 50% in his last 6 games and 12 of 13.  He also has double digit scoring in 12 of 13.  He is coming off of a 15 point 19 rebound performance against Atlanta, and is pretty much the only big rebounder on the Bobcats.

The Bobcats traded away Adam Morrison and Shannon Brown to the Lakers for Vladimir Radmanovic, who will start for the injured Gerald Wallace until he returns sometime after the all-star break.

Wallace is having a tough week.  After suffering a partially collapsed lung and broken rib in Los Angeles, he stayed in an L.A. hospital for 2 nights, but doctors wouldn’t allow him to fly considering his medical condition.  He was stranded there for 5 days before taking a chartered bus back to Charlotte.

Will Daequan play?  So far there has been no indication to whether Cook will or won’t play tonight against the Bobcats, but after the way our bench has preformed in the past 2 games, he will be needed big time.

Raja Bell has been one of the most consistent guys for Charlotte, but will miss tonight’s game as he is suffering from an ailing groin.  The injury kept him out of 5 games in early January, but he had played in 13 straight before being held out tonight.  He will be missed, as he has played 35+ minutes in 11 of the 13 games and scored double figure points in 11 of 13 as well.

Well after last night’s game, I’d say playing a full 48 minutes will be step 1.  Hopefully we’ll have Daequan back so we can get more production out of our bench, which is step 2.

The Clippers did us a big favor beating the Hawks in Atlanta last night.  The Pistons pulled one out in OT over Milwaukee, and the Nets killed the Nuggets by 44, meaning that New Jersey has sole possession of the 8 seed, with the Bucks a game back.  The Bulls also lost in OT, and they are now tied with the Knicks for 10th, a game behind Milwaukee.

SOMETHING TO WET YOUR APPETITE

Thanks to Little Nicky 21 for the great find!