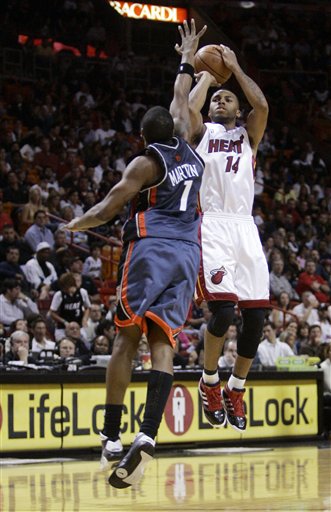 As Michael Jordan sat courtside at the AAA, the former king of the NBA was treated to a show by the one some call ‘the next MJ’.  Granted, D-Wade had only 22 points, but he made of his trademark back-and-fourth drives and showed his range, even hitting a three.  Overall, it was a game the Heat desperately needed to win after dropping 3 of 4.  It was another game where Miami got off to a slow start, but tonight they hit their shots throughout the game and were rewarded with the win.

The Heat’s backcourt players carried them during the 2nd half, shooting a high percentage and sustaining the offense while the D took over.  Wade, Chalmers and Cook were the top 3 scorers for Miami, and each of the three took turns hitting shot after shot in the 4th quarter.  It was a welcome return for Cook, who picked up right where he left off, going 4-of-7 from beyond the arc and scoring 16 points in 17 minutes.  Chalmers dished out a season high 13 assists, and combined with his 16 points made for his first career double double.

There is a chemistry growing between Wade and Chalmers both on and off the court, as it is well known that the two like each other, and that Wade is happy to help Chalmers adapt to the NBA.

Tonight was a night that Michael Beasley’s services were not much needed.  He would score only 4 points on 2-of-4 shooting in just 13 min.

Another poor effort from the free throw line for Miami as they started 0-for-5 and would finish 5-for-12.

At one point in the 3rd quarter Dwayne Wade and Mario Chalmers did all the scoring for Miami.  First D-Wade scored 8 straight points for the Heat, then Chalmers would follow right behind Wade with 8 of his own.

A nice sequence for Joel Anthony with 5:46 left in the game when he swatted a D.J. Augustin layup attempt out of bounds, then on the other end of the court would finish off a nice Daequan Cook pass attempt with a nice layup from under the rim.

The Heat were the only playoff race winners on Sunday, with the Pistons losing at home to Phoenix and the Nets falling in Orlando.  Miami is now back to within 2 games of Atlanta and only a half game behind those pesky Pistons. 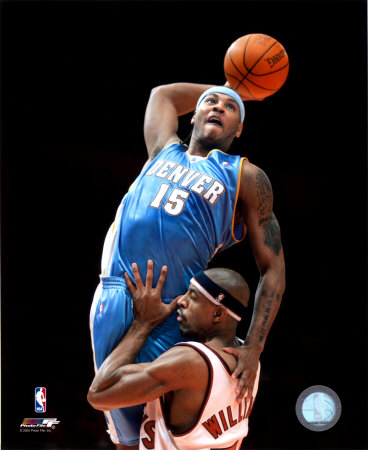 There are so many things wrong with this picture...

Here come the Nuggets, fresh off their embarrassing 44-point loss to the Nets on Saturday.  Lucky us…