THIS IS MY HOUSE

Share All sharing options for: THIS IS MY HOUSE 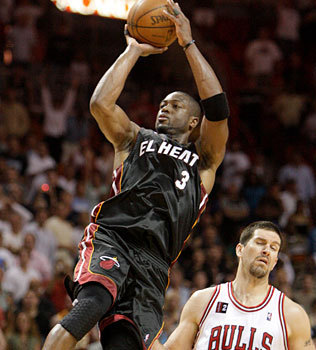 Brad Miller already knew it was going in

The Dwyane Wade legend is growing.  His game against the Bulls was one of, if not the best of the year for Wade, and considering how he went through extended stretches without doing much of anything, its even more impressive. He did everything he could to keep the Heat from blowing the game in regulation but then missed two key free throws at the end of the 1st OT, then missed what would’ve been the game winning layup as time expired.  He came back in the 2nd OT by assisting on 2 of the Heat’s first 3 buckets, then scored the final 6 points for Miami.

The final sequence was something you will only see from Dwyane Wade.  The Bulls had the ball with 11 seconds left in the 2nd OT with the game tied at 127.  Kirk Hinrich inbounded the ball to John Salmons, who tried to drive on Moon but was stripped by Wade with 3 seconds left.  Wade then took the ball and ran down the court, watching the final seconds tick away.  With under a second left Dwyane put up a running 3-pointer that didn’t touch the rim, swishing the Heat to an amazing win.  He then ran to the sideline table and jumped on it, in front of where Heat Owner Micky Arison and his son Nick sit for every game.  Wade screamed "This is my house!!" at the fans, pounding his chest and high-fiving those within reach.  Anybody who thinks D-Wade will be playing anywhere other then Miami after 2010 is sorely mistaken.

Seriously…who else in the NBA makes plays like that?  I’m not asking who can…obviously there are many players who could potentially make that kind of play.  But other then Wade, you don’t see it.

Also have to give a tip of the hat to Ben Gordon.  It’s unfortunate that his stellar game will most certainly be overshadowed by Dwyane Wade.  Gordon single-handedly kept the Bulls in the game, scoring the final 15 points for the Bulls in the 4th quarter, including 5 three-pointers.  He finished with 43 points, but missed shots down the stretch by Gordon and his teammates would prove costly.  The Heat missed some free throws down the stretch, keeping the game closer then it should have been.

Don’t think I forgot about the almost-half court jumper that Wade sunk at the buzzer before halftime, which put the Heat up by 2 after trailing by 13 in the same quarter. That was also, if I’m not mistaken, a swish.

Its also interesting to note that when D-Wade missed two free throws at the end of the 1st OT, the crowd was being asked on the jumbotron’s to ‘shhh’.  After he missed a third in a row with under 2 minutes left in OT #2, the fans started chanting M-V-P again.  What happened?  Wade sunk the next free throw.

Daequan Cook was non-existent for the first 3 quarters, only logging 10 minutes until the 4th.  He’d finish with 32 minutes, but went only 3-for-11 from the field (2-for-9 from 3).  It’s nice to see that he’s shooting a high number of field goals, I’d rather see that then him taking 3 shots a game.  His shot will get consistent again, its been coming and going over the past week or so.

Despite being out rebounded by 10, the Heat were very active in the paint, going hard for boards and contesting/altering shots.  I thought the guards looked a bit tentative when going for rebounds, but other then that I was very pleased.

Our boxing out could use some work however.  The effort was there; the positioning and technique were not.

The Heat moved to 23-6 in games following a loss. 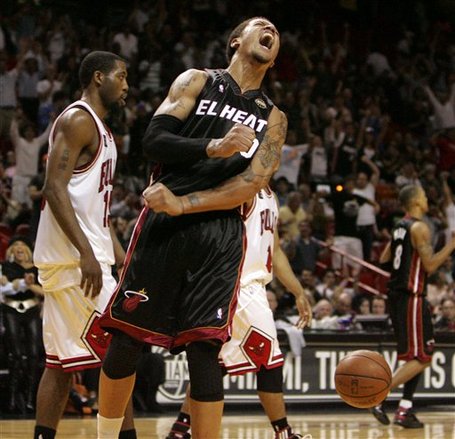 Michael Beasley continues to impress and grow up right in front of us.  He scored 17 points, 8 of which came during overtime.  He added 7 boards, and went 6-for-6 from the foul line.  It's nice to have Beasley and Cook coming off the bench; lethal scoring from the forward and guard position to bring in for any matchup.

Udonis still frustrates on offense, but he had 2 big scores in the 2nd overtime.  He did miss a ‘gimme’ dunk, but got the offensive rebound which led to a beautiful passing play that went from Wade to Beasley to Haslem for a wide open dunk that he would not miss.

Coach Spo said that he would like to get Luther Head through a full practice on Tuesday before activating the newly acquired guard.  After watching Chris Quinn get owned by Derrick Rose, I can imagine why Coach feels the need to get the new guy in there.

Jermaine O’Neal did not get a rebound until 2:32 into the 3rd quarter.  He finished with 4.  Yes, he does do A LOT for the Heat that does not show up on the score sheet.  But we could do a little better…and nobody knows it better then Jermaine.  This makes it much easier to deal with as a ‘fan’, knowing that he is more dissatisfied with his performance then I am.

Mario Chalmers…great D on Rose in the 2nd half and very solid game shooting the ball (17 points on 5-of-9) before fouling out with 2:10 left in the 1st OT.  It was an intentional foul on Joakim Noah under the basket, which stopped the X-Gator from scoring an easy bucket.  He would go on to miss both foul shots.

The Heat, Hawks and Pistons all won last night.  The race for 4th is pulling away from the race for 8th.  Miami is starting to look more consistent, but we’ll see how well they hold up the rest of this very tough week. 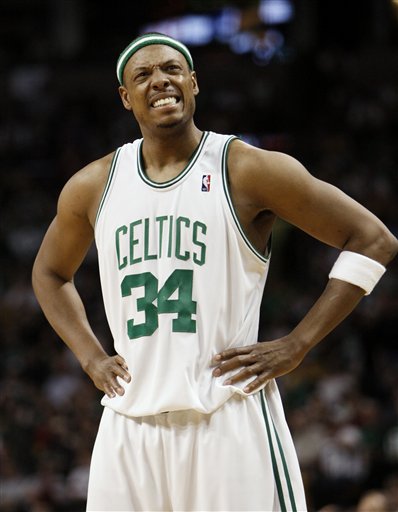 The Celtics come to town a little beaten up.  They’ll be without starters Kevin Garnett and Rajon Rondo, and reserve players Glen Davis, Brian Scalabrine and Tony Allen.  The Celts are 5-3 since Garnett went down but lost their first game without Rondo, Sunday against Orlando.  The week doesn’t get easier, with the ridiculously hot Jazz coming to town on Saturday, and then playing in Philly the next night.