Does An MVP Candidate Need His Team To Finish In 1st Place? D-Wade Hopes Not

Share All sharing options for: Does An MVP Candidate Need His Team To Finish In 1st Place? D-Wade Hopes Not 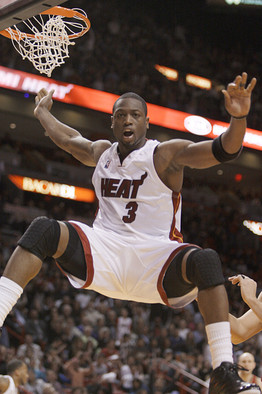 With all the MVP talk surrounding Dwyane Wade, one point that many ‘experts’ make is that Wade is not on a 1st place team, while LeBeon James and Kobe Bryant are.  How important is that when choosing an MVP?  By definition, MVP is for the Most Valuable Player, but to whom?  Is it to that player’s team, or to the league itself?  I sincerely hope that it’s for the particular players team.

Obviously it's a little different in sports where more players have the opportunity to make a difference.  In the NBA, usually at the most the 5 starters are the only ones who play enough to have a shot at MVP.  In football, there are only a handful of positions that can provide an MVP.  Baseball and Hockey have more players in the 'spotlight'...so you can see why they provide so many more non-1st MVPs.  And baseball has one for each league, so....