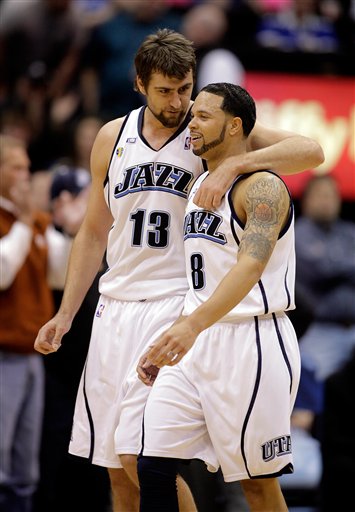 The Jazz are coming off of their first loss in 13 games, falling in Atlanta on Wednesday night.  While Utah has always been tagged as a ‘physical’ team since the days of Malone and Stockton (and even coach Jerry Sloan of you really want to go back), this year the team has certainly transitioned away from that label.

At times, Utah has shown a lack of aggression and isn’t intimidating anybody from a physical standpoint.  In their loss in Atlanta, this was quite apparent as the Jazz got smacked around from the beginning and never responded.  When a team shows that kind of weakness, their opponent should pounce all over it, which is what Miami will need to do tonight.

The Heat’s normal 1st quarter routine of getting the ball to Jermaine O’Neal down low and working the offense from the inside out will work to their advantage even more against Utah.  I only hope they are aware of how the Jazz can be intimidated and utilize the big bodies of O’Neal, Haslem and even Jamaal Magloire, who had some very productive minutes against Boston.

If Utah gets into their comfort zone on offense and start drilling jumpers, the Heat will be in a world of trouble.  One key element will be how Mario Chalmers responds to guarding Deron Williams.  Hopefully the rookie can handle him, but if not we can only hope Chalmers can stay out of foul trouble, and could possibly see Jamario Moon covering the opposing PG.

Speaking of foul trouble, Utah center Mehmet Okur has a tendency of committing some early fouls, so some 1st quarter inside aggression by Miami will be good for a lot of reasons.  Remember, Jermaine O’Neal drew 4 Celtics fouls in the first 3:11 of the Boston game.

Jerry Sloan was asked if he thought D-Wade could be stopped and how his team can try and limit his production, but Sloan was honest in saying that Wade had too many weapons to be contained.

"Him," Sloan said of Wade. "He gets on top of the basket. He's gotten 15, 18 free throws, I would assume somewhere in that neighborhood, playing against us. We can't get him stopped. We don't block his shot, we can't get over and get him shut down. He's just been a terrific player every time we've played them."

Some Utah players were also asked what they thought about the MVP race, with Deron Williams and Carlos Boozer both saying they thought it was a two man race between Kobe Bryant and LeBron.  Williams basically said that the Heat’s record is what will hold Wade back from winning the award, and gives the edge to Kobe for playing in the ‘tougher’ Western Conference.

Carlos Boozer is still finding his way offensively, shooting 42% in his 8 games since coming back from a knee injury.  He’s averaging 10.3 points and 8.8 boards since his return, a far cry from what is expected of him.

Last night the Hawks, Pistons and Sixers all won, each gaining a half game on Miami.  The Knicks won their third straight on the road…just throwin’ that out there.  Meanwhile, the Bucks, Nets, Bobcats and Bulls all lost, so now there are 5 teams within a half game…all going for 8th place.

THE RACE FOR 8th: